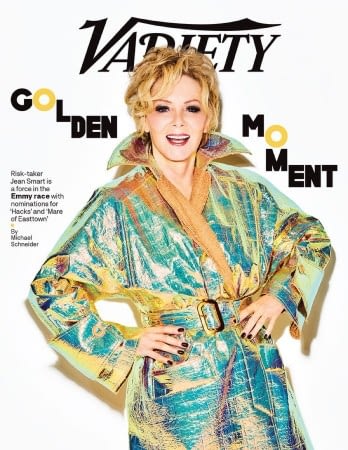 –Jean Smart, who is nominated at Sunday night’s Emmy Awards for both Hacks and Mare of Easttown, covers the new issue of Variety. She talks about her character on Designing Women (“I always felt like she was my actual core person, kind of gullible and trusting and believes that everybody’s basically good. And I’d like to play a character like that again”) and losing her husband while she was shooting Hacks (“Him passing away was just not ever even a thought. And it’s changed every moment of my everyday life; every atom of my existence I feel like is altered”).

–Andrew Garfield revealed his mother died while he was preparing to film Tick, Tick… Boom! and says “every frame, every moment, every breath” of his performance in the musical is in honour of her. “We lost her just before COVID, just before we started shooting, after a long battle with pancreatic cancer. So, for me, I was able to continue her song on the ocean and the wave of Jonathan [Larson]’s songs. It was an attempt to honor him in his unfinished song, and her in her unfinished song, and have them meet.”

-Real Housewives star Mary Cosby has been accused of running a cult. What is up with all the shady activity and criminal investigations overtaking this franchise lately?

–Timothée Chalamet dined with Larry David in NYC and everyone is wondering what in the world that convo sounded like.

–Zoë Kravitz and Channing Tatum may not have officially commented on their relationship yet, but they did allow Vogue to take a photo of them at the Met Gala featuring him holding her purse.

-An ex Grey’s Anatomy exec producer says that leading up to Derek’s death, Patrick Dempsey was “sort of was terrorizing the set. Some cast members had all sorts of PTSD with him. He had this hold on the set where he knew he could stop production and scare people…I think he was just done with the show. He didn’t like the inconvenience of coming in every day and working. He and Shonda were at each other’s throats.”

–Natalie Portman‘s new Dior ad is very, very pretty. (I coulda done without the whale shot, for my own mental sanity.)

-Also pretty is JLo‘s video from Venice for Dolce & Gabbana (though I still can’t believe everyone seems to be giving that  brand a pass).

-Smallville’s Allison Mack has begun her three-year prison sentence related to her involvement in the NXIVM sex cult.

-This is an interesting take on how Nicky Minaj‘s vaccine tweets are distracting us all from the fact that her husband is facing 10 years in prison.

-One of the multiple sexual assault lawsuits against Marilyn Manson has been dismissed due to statute of limitations.

-Following all the pushback against CBS’ proposed reality show The Activist (this was my fave reaction to it), they’re backtracking and re-imagining the show.

–Jeffrey Bowyer-Chapman talked about the horrible racist cyber-bullying he received when judging Canada’s Drag Race. It’s awful obviously, but fan fave contestant Jimbo had a different take on it: “It was just not the right fit with the [early pandemic] times, that stereotypical harsh judge — the Simon Cowell, tough-love judge. I don’t think him playing up that campy bitchiness was the best way to go about it all.” (And I’m guessing his judging had more to do with the producers than him.)

-There won’t be new rotating guest hosts this time around on Jeopardy. Mayim Bialik and Ken Jennings will split hosting duties for the rest of the season.

-This is review of Hulu’s The D’Amelio Show paints a grim view of the two teen TikTokers’ lives. “Charlie and Dixie D’Amelio seem truly distressed about the expectations they labor under, but to be famous and to continue working at the pace that they do seems to be their only mode of being.”

-Here’s the trailer for Love Life season 2. I really liked the first season with Anna Kendrick, and am very much looking forward to this one with William Jackson Harper (The Good Place’s Chidi).

–Christopher Nolan’s demands to secure the rights to his next film, a movie about J. Robert Oppenheimer, included total creative control, at least a 100-day theatrical window, around a $100 million budget, equal marketing spend, 20 percent of first-dollar gross, and a blackout period where the studio would not release another movie for three weeks before and after the feature. Look, I don’t begrudge him for trying to get the most control and money possible. But for someone who talks a big game about how streaming is killing theatres, him demanding the studio can’t release another movie within three weeks of his has nothing to do with the health or future of theatres.

-Following the box office success of Shang-Chi, Disney will debut the rest of the movies on its 2021 schedule in theaters only.

–David Chase is not happy that his Sopranos prequel is also streaming on HBO Max. “I don’t think, frankly, that I would’ve taken the job if I knew it was going to be a day-and-date release…People should go see it in a theater. It was designed to be a movie. It’s beautiful as a movie. I never thought that it would be back on HBO. Never.” I don’t know that an audience who fell in love with a show on TV is really interested in watching this any place but on TV. Also, the next time a director bemoans their project going to streaming during a pandemic because they care about which medium is displaying their art (which I’m sure is true), they should also be asked if some of their anger is coming from missing out on box office points and backend profits. Which would be understandable! But maybe it’s just not all about the art?

–Maria Schrader’s I’m Your Man has been chosen to represent Germany at the Oscars. I saw it this week and I loved it. Who knew Dan Stevens spoke perfect German?