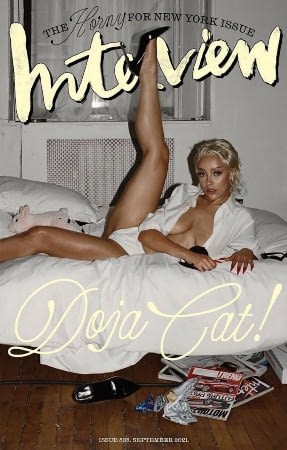 –Doja Cat is on the September cover of Interview Magazine. She chats with Missy Elliott about writer’s block, rapping vs singing, and pulling back from social media.

-In their Billboard cover interview, BTS responded to questions regarding allegations that their fans’ activity amounts to chart manipulation. “It’s a fair question,” BTS member RM said. “But if there is a conversation inside Billboard about what being No. 1 should represent, then it’s up to them to change the rules and make streaming weigh more on the ranking…Slamming us or our fans for getting to No. 1 with physical sales and downloads, I don’t know if that’s right…It just feels like we’re easy targets because we’re a boy band, a K-pop act, and we have this high fan loyalty.”

–Zoe Kravitz and Channing Tatum are buying toilet paper together, so this might be more serious than we thought.

-Also, the fact that he follows a bunch of her fan accounts on Instagram is hilarious.

-This is a good look at how Ryan Reynolds (and undoubtedly a team of social media strategists) marketed Free Guy to keep it fresh in audiences’ minds throughout its many delays.

–Letitia Wright was released from the hospital after suffering minor injuries while filming a stunt on the set of Black Panther 2.

-ABC’s reboot of The Wonder Years now has a trailer... with a little help from Don Cheadle.

-I liked this piece about how the Ted Lasso backlash “is the fault of the out-of-season, mega-sentimental, momentum-halting Christmas episode,” and the (undeserved) criticism would be much quieter if the series dropped all at once, because we’ve all forgotten how to watch serialized TV. “This is what serialization has always been about! That’s the whole deal! It’s what TV always was! But once we get used to the have-it-all model, the absence becomes distinctly uncomfortable, especially when the show itself is toying with occasionally uneasy mixes of TV structures.”

-I also liked this article on why romance readers are responding to the show. As I mentioned yesterday, it’s got all classic the tropes.

–R. Kelly allegedly said he was a ‘genius’ and therefore he should get to date young girls.

-Meanwhile, he (rightly) questioned why Tony Hawk’s new skateboard with his blood on it is not getting the same reaction Lil Nas X’s shoes with blood in them did.

–Tom Cruise screened the first 13 minutes of his new Top Gun movie at CinemaCon, and the audience loved it. It included his motorcycle cliff jump that required a year of training.

-Time’s Up CEO Tina Tchen has resigned over her connection to Andrew Cuomo.

-This is a good article on how The Other Two (returning tonight!) was set for an encore after coming off its critically acclaimed first season. Then came the pandemic.

–Rosie O’Donnell answered every question Vulture had about Sleepless in Seattle.

–Kristen Stewart‘s Princess Diana film Spencer just released its first trailer. It’s like the studio knows the thing we want to hear most is her accent, so they held it back.

–Tilda Swinton plays a woman who begins experiencing a mysterious sensory syndrome while traversing the jungles of Colombia in the trailer for Memoria.