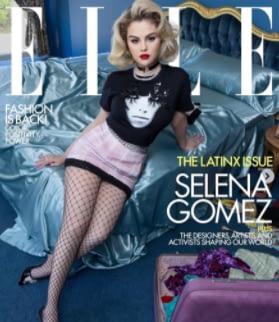 -In her new Elle cover story, Selena Gomez opens up about mental illness, lupus, and letting go of social media. I’m very intrigued by her new Hulu show Only Murders in the Building, in which she stars alongside Steve Martin and Martin Short. The reviews are good.

-Also, Hailey Baldwin (who is married to Gomez’s ex Justin Bieber) liked a post about the cover. I appreciate that she knew that would make headlines.

–Kanye West has filed to legally change his full name to Ye.

–Megan Thee Stallion has reportedly filed legal documents  alleging that her label is blocking the release of new music from her, particularly a remix of BTS‘ global hit “Butter.”

-No surprise here: Disney is hoping to resolve its issues with Scarlett Johansson in private. Disney’s lawyers filed a motion to put the dispute over Black Widow’s profits in private arbitration rather than have a public trial.

-Amid all the hand-wringing about the quality of season 2 of Ted Lasso, this is the most valid complaint I’ve seen: Apple’s weekly rollout is hurting it. (Also, here’s yet another critic alluding to the fact that the season is about to kick into a higher gear…)

-The world is morning Rolling Stones drummer Charlie Watts, who passed away at 80.

-Scheduling conflicts may keep Mayim Bialik from hosting Jeopardy full-time, but she has expressed an interest in the position if she is able to make it work. Of course she has.

-I’m surprised that it’s taken this long for some of her questionable momfluencer advice to surface again.

-I’m very glad to see Brandon Routh leading a new TV show after how it sounds like he was treated on Legends of Tomorrow, and a Netflix series about Magic: The Gathering sounds perfect for him.

-In her second day of testimony, the woman accused R. Kelly of forcing her to have sex with his other girlfriends and another male, and testified that he made her lie to Gayle King.

–Jessica Chastain says she spent 4 to 7 hours a day in the makeup chair for The Eyes of Tammy Faye. “I think for sure I’ve done some permanent damage to my skin on this.”

-If Harry Styles launches a nail polish line I will buy every damn shade.

-Buffy alum Nicholas Brendon is in the new again. He was arrested last week and charged with felony prescription fraud.

-This is a great thread of reviews from Asian critics of Shang-Chi and the Legend of the Ten Rings.

-Venom: Let There Be Carnage, which was originally supposed to be released in Oct 2020, will likely be delayed again.

–Dan Stevens plays a robot in the trailer for the German sci-fi romcom I’m Your Man. Ohhhh, this might be one of my TIFF picks.

–Margaret Qualley is a single mother fighting for survival in the trailer for Netflix’s Maid. (Her real-life mom Andie MacDowell plays her on-screen mom in the series.)

-Netflix just announced a huge new slate of movies dropping over the next few months. (I’m especially excited for Cowboy Bepop based on the magnificent first photos.)

–Melissa McCarthy and Chris O’Dowd play a couple dealing with the loss of a baby who meet ex-shrink Kevin Kline in trailer for The Starling, on Netflix September 24.

-The Spider-Man: No Way Home trailer leaked over the weekend, but it officially debuted at CinemaCon. I’m not as interested in a story about the multi-verse (as someone who always got annoyed by it when the CW superhero shows messed around with alt versions of characters) and I’d prefer if Peter Parker was still fighting a neighborhood badguy like Michael Keaton in Homecoming, but Tom Holland and Zendaya own me, so it’s all good.