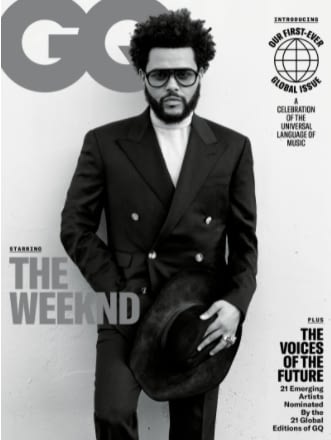 –The Weeknd covers the Sept issue of GQ and talks about his dark persona (“I am not dark. My art is dark, and I’ve gone through dark times. I’ve used those dark times as inspiration for my art. But I feel like because I’m not dark, I was able to channel it and put it into my music and into my art”), quitting drugs (“Drugs were a crutch. It was me thinking that I needed it. And not doing the work to figure out how not to need it. And I’ve spent the last few years realizing that and thanking God that I don’t need it”), and bingeing The X-Files during the pandemic (“Everyone copied them, bro. Everyone”).

-In her new GQ profile, Olivia Rodrigo says she’s been following the Britney Spears news closely. “I think, as an industry, people are getting better at not taking advantage of and manipulating and bullying young women. But it’s still so apparent, and I witness that too. Not near at the level that Britney has, obviously. I think that’s an important paradigm that I hope that we’ll be able to break in the coming generations. I’ve definitely seen corporate dollars be prioritized over people’s mental health.”

-Meanwhile, Britney Spears’ lawyer has filed to expedite the removal of Jamie Spears as conservator.

–Ariana Grande and Justin Bieber‘s charity single “Stuck With U” has helped many, many families of first responders.

-This is a fascinating look at how Dwayne “The Rock” Johnson so rarely has an on-screen romance — and why big Hollywood blockbusters have begun to eschew romance plots in general. I always assumed it was a personal preference that some actors have (character actor Neal McDonough won’t kiss anyone who’s not his wife), but it also points to a larger trend towards sexless action heroes. Maybe because Hollywood has gotten criticism for writing women as one-note love interests, it’s just opted to not include them at all instead of writing fully fleshed out love interests. Which sucks.

-Zoey’s Extraordinary Playlist may be rescued by Roku! The streamer is eyeing a wrap-up movie.

-The Met Gala is normally held in May but was pushed back this year. Page Six reports that those making the cut for invites include Rihanna, Jennifer Lopez, Emily Ratajkowski, Camila Cabello and Lupita Nyong’o.

-Jeopardy is reportedly close to picking its new full-time host — and it looks like it’ll be Mike Richards. I really thought it’d be Levar Burton, Ken Jennings or Aaron Rodgers. Richards is a producer on the show and the fact that he’s in late stage negotiations is leading a lot of people, including a contestant during his run, to think this was always in the works and the guest host appearances weren’t ever about auditioning for the gig.

-I really like this list of the 40 best musical performances on TV. No one but Prince at the Super Bowl could be number 1, but the one that’s stuck in my brain craw remains TV on the Radio’s Letterman appearance at number 5.

–John Corbett and Bo Derek, who’ve been together for 20 years, got married last Christmas.

-I’m so confused about why Kristen Bell had a stylist for her recent road trip.

-With Free Guy getting good reviews (currently 84% fresh), THR profiles director Shawn Levy, who seems to keep his head down and do the work. He currently has 15 projects in development for Netflix.

-I mainline teen movies — the cheesier the better — but He’s All That might be a bridge to far for even me. Luckily, the trailer recaps the entire movie so I don’t even need to watch it.

-Here’s the trailer for the much-delayed new series Y: The Last Man, based on the beloved graphic novel.