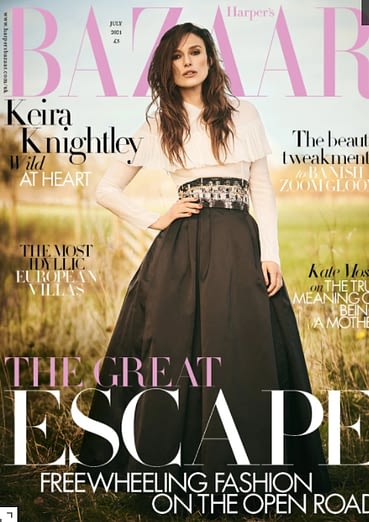 –Keira Knightley opened up about her experiences with misogyny and harassment in the latest Harper’s Bazaar UK — and during the interview she and the writer were followed by a lone male stranger. “I think it’s quite interesting talking about this while being chased around. I love that politician who said there ought to be a curfew for men and men were outraged, and you think – but there’s a curfew for women and there always has been.” On a lighter note, she talked about trying to lighten the mood during the early days of quarantine: “We have a trampoline in our garden, and we decided we were only allowed to wear dresses on it. I put on red lipstick every day, and every bit of Chanel that I have in my cupboard, and my daughter Edie had Chanel ribbons plaited into her hair and fairy wings.”

-It sounds like Kanye West had a good birthday. He celebrated his 44th in France with Bradley Cooper’s ex, Irina Shayk.

-The letter from Armie Hammer’s mom at the end of Vanity Fair’s report about him going to rehab is … something.

-There’s more talk of Jennifer Lopez moving to LA to be closer to Ben Affleck.

-This sucks: Zoey’s Extraordinary Playlist has been canceled at NBC after talks to move the series to Peacock fizzled. The showrunner still has hope someone else will pick it up, but that feels unlikely.

-Three different shows debuting this week mess around with time in some way. I have no patience for that anymore.

-Netflix’s Sweet Tooth wrapped the USA Today in an advertorial, and people got really freaked out.

-I’m not sure I understood NFTs before Lindsay Lohan explained them in this interview.

–Christine Baranski and Audra McDonald toast to the future in The Good Fight trailer. I can’t wait.

-The reviews for part 2 of Lupin are good — though will the show know when to quit?

-Speaking of reviews, critics adore Loki, which is now out on Disney+.

–Jessica Chastain and Andrew Garfield are unrecognizable as the infamous televangelists Jim and Tammy Faye Bakker in the trailer for The Eyes Of Tammy Faye.

Rihanna and A$AP Rocky Get Flirty For Fenty

Rachel Lindsay Speaks Out About the Bachelor