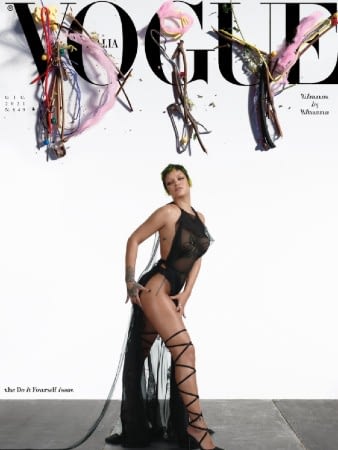 –Rihanna is on the cover of Vogue Italia’s DIY issue, and she lived up to the title by doing her own photography and styling.

-I was already excited for Loki, but this interview with the showrunner sealed it. He not only references The Leftovers and Mad Men as inspiration, but he’s not into this “it’s a 6-hour movie” crap that people who come to TV from films often pedal. “It was important that every episode stood alone. The Leftovers or Watchmen, which I admired so much—every one of those episodes felt like a distinct short story. That’s the sign of a great episode of TV.”

-Meanwhile, this is some pretty great social media marketing for Loki. A handle for a character called Miss Minutes, mascot of the Marvel’s Time Variance Authority, tweeted a coded message which Twitter worked out to mean “once I escape this hell prison they call the TVA I swear I’m gonna burn everything to the ground.”

-On the same day DeuxMoi posted a blind item about a Star Wars actor storming off the set of his Netflix show because he didn’t like a script, Netflix announced that John Boyega has exited the movie Rebel Ridge mid-shoot due to “family reasons”

–Kendall Jenner and Hailey Bieber are among those impressed with Dave in the season 2 trailer. I don’t think I finished the first season but it’s a fun, weird little show.

-HBO says nearly 3m people watched the Mare of Easttown finale, tripling the ratings of its premiere. This is what happens when you air a show week to week and allow word of mouth to work, instead of dumping all episodes at once.

-Speaking of Mare, I loved this podcast interview she did with The Watch guys. She’d appeared on the podcast when she was doing the initial press rounds on the show, and she liked their questions so much she requested to come back to talk about the finale.

-I can’t believe there’s another Boss Baby movie but here we are. Love seeing Amy Sedaris getting paid though.

-Here’s the final Black Widow teaser before it debuts July 9.

-A new clip from F9 sees the crew trying to escape baddies and landmines in a jungle.

-The first trailer for Roadrunner: A Film About Anthony Bourdain, which details the late chef’s life and was directed by Oscar winner Morgan Neville, has been released. This made me tear up, and I really hope movie theatres are open here when it comes out because this feels like a good reason to return.