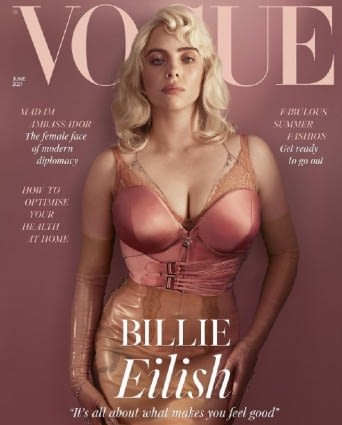 -There is a lot of tiring discourse about Billie Eilish‘s decision to show off a more revealing look in Vogue. She’s 19 — trying on different identities is part of growing up. In the interview she says “It’s all about what makes you feel good. If you want to get surgery, go get surgery. If you want to wear a dress that somebody thinks that you look too big wearing, f**k it.” And she sounds like she was completely in control of the photoshoot, saying in her IG post that the magazine “respected her vision”.

-Meanwhile, her post about it has become the fastest ever Instagram photo to reach 1M likes – in just 6 minutes.

-Is it really happening??!? Jennifer Lopez and Ben Affleck were papped hanging out together, with reports that he’s been “spotted multiple times going to J.Lo’s California home during the day” since her split from ARod.

-This one’s gonna be expensive: Bill and Melinda Gates are getting divorced after 27 years of marriage.

–Lily James addressed her PDA scandal with Dominic West, saying “There is a lot to say, but not now, I’m afraid.”

–Kevin Spacey is set to evade a $40M sexual assault suit unless his accuser reveals their identity.

-SNL season 46 will close out with Keegan-Michael Key and Anya Taylor-Joy hosting, with musical guests Lil Nas X and Olivia Rodrigo. Can we just go straight to these episodes and skip the Elon Musk bit?

-Filming of season two of Bridgerton is underway and we have our first photos. Kate!

–Victoria Beckham would ‘rather die’ than wear Crocs — even if they came from Justin Bieber. Same.

–Michael B. Jordan and Lori Harvey reinvented the red carpet pose for the virtual premiere of his new movie.

-As if we weren’t already excited for Succession season 3, they just cast Alexander Skarsgård.

–Taika Waititi is taking a break from maybe dating Rita Ora to play the pirate Blackbeard in a new HBO Max series.

–Channing Tatum and Jenna Dewan are still trying to reach a financial settlement three years after splitting up.

-The Falcon And The Winter Soldier director Kari Skogland says the goal was to get the audience to like John Walker by the end of the season. “And I think everyone does.” Ha ha ha — nope.

-Entourage creator Doug Ellin claims HBO Max was hiding the series on its streaming platform for not being woke enough. Also nope.

–Oprah Winfrey says Drew Barrymore‘s show changed her life with the its use of green-screen technology.

–Suzanne Rogers posing with Trump has really shaken up the Canadian fashion industry.

-This is a great interview with The OC’s costume designer about Seth Cohen’s immaculate fits.

-It looks like Noah Centineo got ripped for nothing; he’s reportedly out of the He-Man movie.

-This is the first NFT I support: the girl in the “Disaster Girl” meme is now an NFT worth half a million dollars.

–Evan Peters needed a hug after THAT scene on the last episode of Mare Of Easttown. Fair.

-Pose’s executive producer, writer and director Janet Mock had lots to say at the show’s premiere last week, including “I want to get paid more. Why am I making $40,000 an episode, huh? Do you know who the fuck I am?” (That does seem low for a showrunner.)

-Marvel dropped a new video and the second half features  a list of premiere dates for bunch of new films from this year until 2023, the reveal of the next Black Panther title (it’ll fittingly be called Black Panther: Wakanda Forever), as well as the first footage of Chloe Zhao‘s The Eternals.

-Here’s the first trailer for Stephen Amell’s new Starz drama, which debuts in August. It seems a bit like Friday Night Lights, but with wrestling instead of football.