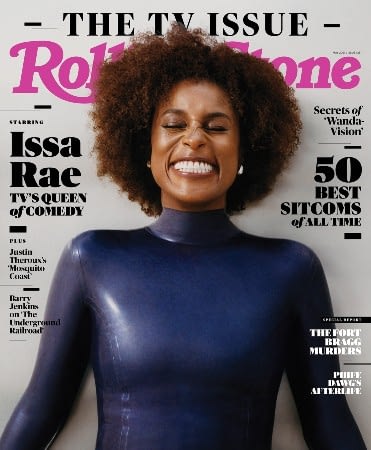 –Issa Rae talks about building her comedy empire in her Rolling Stone interview, which features an EXCELLENT cover.

-Actually, it seems like this whole week has been a series of excellent magazine covers, including Christina Aguilera on Health, the creators of Minari on THR, and Lucy Lui on Women’s Health.

–Chrissy Teigen just couldn’t stay away from Twitter. I feel that.

-British actress Helen McCrory, best known for her performances in Peaky Blinders, Penny Dreadful, and as Narcissa Malfoy in the Harry Potter franchise, has died at the age of 52 after a battle with cancer.

-Following the success of Barb & Star, Kristen Wiig and Annie Mumolo are teaming up now with Disney to develop a musical comedy focused on Cinderella’s evil stepsisters. Ok, but I also want more Barb & Star.

–Prince Philip was apparently super fascinated by aliens and UFOs, which weirdly makes me like him more.

–Carey Mulligan has joined the cast of Adam Sandler’s next movie, which I’m assuming is more Uncut Gems than Just Go With It.

–Milo Gibson and Laurence Fishburne star in the trailer for Under The Stadium Lights, the true story of a small-town high school football team who beat all the odds to win their state championship.