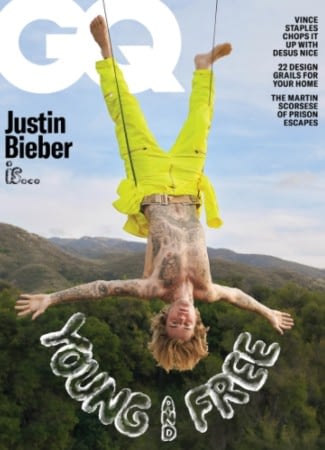 –Justin Bieber is on the new cover of GQ, and he talks about his marriage to Hailey Baldwin (“The first year of marriage was really tough because there was a lot going back to the trauma. There was just a lack of trust. There was all these things that you don’t want to admit to the person that you’re with, because it’s scary. You don’t want to scare them off by saying, ‘I’m scared'”), on having children (“Not this second, but we will eventually”) and his faith (“He is grace. Every time we mess up, He’s picking us back up every single time. That’s how I view it. And so it’s like, ‘I made a mistake. I won’t dwell in it. I don’t sit in shame. But it actually makes me want to do better'”).

-He also give GQ a look inside his tour bus, which is insane.

–David Tennant faked having a personal assistant so he didn’t have to attend events he didn’t want to go to, becoming my personal hero.

-Netflix has renewed Bridgerton for seasons 3 and 4 which, if they continue to follow the books, will focus on Benedict and Colin, respectively.

-Meanwhile, Shonda Rhimes and Betsy Beers talked to Vanity Fair about staying in the Bridgerton business, and the intense way fans are mourning the loss of Regé-Jean Page‘s Duke of Hastings.

–Lady Gaga‘s underrated 2013 album ARTPOP hit the top 3 on iTunes as fans continue to circulate a petition to release more songs from the LP. Gaga tweeted: “I fell apart after I released this album. Thank you for celebrating something that once felt like destruction. We always believed it was ahead of its time. Years later turns out, sometimes, artists know. And so do little monsters. Paws up”

-Meanwhile, Gaga was spotted wearing a poufy white wedding dress on the set of the Gucci movie.

–DMX‘s family released a statement to dispel rumours. They clarified that no one is buying his master recordings and warned of scammers pretending to raise money for his upcoming memorial

-Minari’s Yuh-Jung Youn continues to be a delight. When asked about staying home during the pandemic, she said “Staying in bed the whole day is my pleasure and my hobby. I like to watch TV or just doze, not thinking about anything. I’m sorry to say I’m really enjoying quarantine. I don’t have to see anybody. I can just stay home 24 hours a day in bed, my favorite place.”

–Kevin Smith‘s new horror movie will be sold as an NFT. The Daily did a whole podcast today about NFTs, and I still don’t get the appeal.

–George Clooney, Noah Wyle, Julianna Margulies and other ER alums are coming together for a special Earth Day episode of Stars in the House to support The Actors Fund amid the pandemic.

–Madonna took a commenter to task for their thoughts on gun control.

-The creators of Netflix’s Shadow and Bone adaptation promise they’ve improved Mal, one of the book’s most problematic characters. The Shadow and Bone books were ok, but honestly I’m excited to watch this show because it’s also going to feature characters from the sequel series Six of Crows, which were MUCH better books.

-Here’s the trailer for the final season of Shrill starring Aidy Bryant.

-Here’s the first trailer for The Hitman’s Wife’s Bodyguard, starring Ryan Reynolds and Salma Hayek. Using “Hit Me Baby, One More Time” in a trailer for a hitman movie is gold.