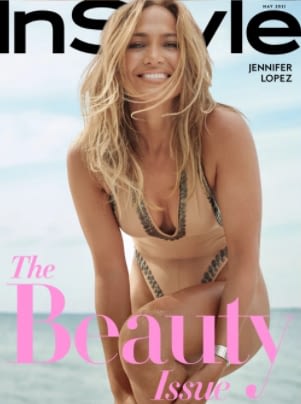 –Jennifer Lopez’s Instyle cover features quotes about her from a ton of costars and celebrities (though, noticeably, nothing from A-Rod). Among the famous friends singing her praises are Charlize Theron (“To call her a triple threat doesn’t come close to describing her—she’s all of the threats!”), Michelle Obama (“What impresses me the most about her is her unwavering commitment to leverage those gifts and use her platform to give voice to the voiceless”), Matthew McConaughey (“Extremely deliberate, intentional, fully choreographed, and self-aware, she even knows how to make accidents look like accidents”), and — most hilariously — Ben Affleck (“Where are you keeping the fountain of youth? Why do you look the same as you did in 2003 and it kind of looks like I’m in my 40s…at best?”).

-It’s Thandiwe, Not Thandie. Thandiwe Newton reclaimed her name in British Vogue, explaining the “w” was left out in her first acting credit and it stuck. “That’s my name. It’s always been my name. I’m taking back what’s mine.”

-I don’t know if I’m just getting used to the at-home fashions or if stars/stylists are really learning how to bring it, but the SAG Awards outfits were some of the best we’ve seen in ages.

-Last night’s SAG Awards marked the first time in its history that all four film acting categories went to actors of color. It also revealed how wide open the Oscar race really is. Is this what it looks like when stars can’t campaign? I love it!

-Rapper DMX overdosed on Friday night which triggered a heart attack, and the prognosis is not looking good.

–Regé-Jean Page will not be returning for Bridgerton season two, saying he was only contracted for a one-season arc. I mean, he’s right, and I don’t think it’s as big of a deal as people seem to be making it out to be. The second season follows the second book, which means the main focus was always going to be on Anthony and Kate, so Simon and Daphne would be pushed to the background regardless. A couple of cameos would have been nice (especially in the Pall Mall scene), but I hope his absence doesn’t keep people away from the show. Not only will this season focus on the book series’ BEST couple, it will be led by an openly gay actor and a British-Indian actress — and that’s pretty effing boss.

–Apple Martin roasts her mom Gwyneth Paltrow‘s morning routine in a new TikTok: “She just prances around the bathroom putting on her millions of Goop glow products…Then she gets to working making some more vagina eggs and vagina candles and vagina perfumes. Just everything vagina.”

-In a new video on her YouTube page, Hailey Bieber chats with a psychologist about the negative effects of social media on mental health.

-Reviews for HBO’s The Nevers suggest the show requires some benefit-of-the-doubt. It’ll be interesting to see what the next batch of episodes looks like since Joss Whedon left the show, because according to Variety, in its current state it “bears so many of his narrative and stylistic hallmarks that it might as well be playing Whedon Bingo.”

-One of the only shows I’m currently watching right now, Zoey’s Extraordinary Playlist, has pretty much lost me. This week’s episode was especially rough.

–Armie Hammer has departed The Minutes, a Broadway play which was originally set to debut last year and is now on track to resume production during the 2021-2022 season.

-Here’s the trailer for Netflix’s The Circle season 2.

–Jamie Kennedy did not seem prepared to be grilled about his role in an anti-abortion movie.

-The biggest buzzed Marvel trailer right now is the new one that dropped today for the Loki series on Disney+, which is coming this summer. It looks really, really good.