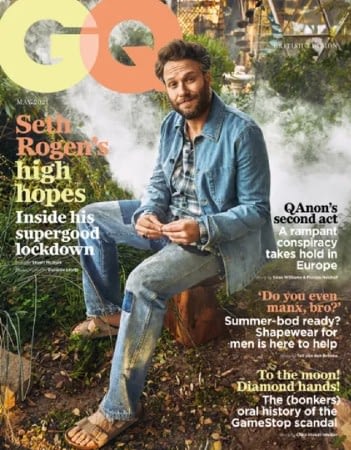 -In his British GQ cover story, Seth Rogen talks about his new weed business and confirms reports that Emma Watson stormed off the set of This Is The End — but he understood why she was uncomfortable over the super edgy scene. “I mean, I don’t look back on that and think, ‘How dare she do that?’ You know? I think sometimes when you read something, when it comes to life it doesn’t seem to be what you thought it was. But it was not some terrible ending to our relationship. She came back the next day to say goodbye. She helped promote the film. No hard feelings and I couldn’t be happier with how the film turned out in the end.”

–Lil Nax X‘s new music video is giving “WAP” a run for its money when it comes to horniness levels. That lap dance with the devil? Whooo boy!

-Speaking of eyebrow-raising music videos, Demi Lovato is set to recreate her overdose in her upcoming video for “Dancing with the Devil.”

–Bindi Irwin is also a new mom. She gave birth to a baby girl on her first wedding anniversary.

–Bryce Hall says he ‘didn’t cheat’ on Addison Rae. I refuse to care about any of these people.

–Serena Williams praised her friend Meghan Markle in a new interview, calling her “a great person and I think the epitome of strength.”

-Meanwhile, Prince Albert called out Harry and Meghan for their Oprah interview, saying it “”wasn’t the appropriate forum to be able to have these kinds of discussions.”

-I liked this piece on the Oscars, the movie business, and how the last year was much more than just a blip in the history of Hollywood.

-So basically everyone who’s ever been on Grey’s Anatomy is coming back this season, huh?

-I know I keep complaining that Hollywood has no new ideas, but I legit squealed when I read that an Ally McBeal revival is in the works, with Calista Flockhart possibly reprising her role.

–Maya Rudolph played the mimic challenge on the Tonight Show and crushed it.

-There’s lots of talk about whether Meghan McCain should leave The View. I can’t imagine they want her to; she generates headlines for them almost every week.

-I don’t know if it’s because I find Margot Robbie so charming as Harley Quinn, or if the CW has worn me down when it comes to King Shark, or if it’s the Idris Elba of it all, or if it’s just John Cena’s arms, but I really dig the trailer for James Gunn’s The Suicide Squad. I don’t even know who I am anymore.

Sofia Vergara Tried to Dance at the Grammys. It Didn’t Work.