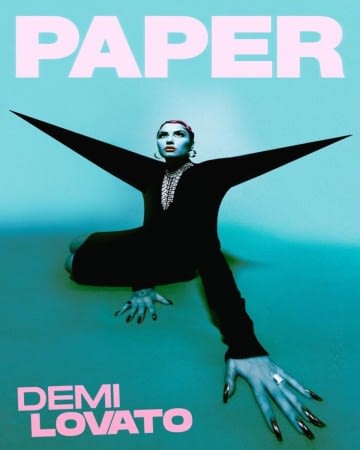 –Demi Lovato is a beautiful alien on the cover of Paper. In the interview, she talks about the ups and downs of the past year (“At one point I was engaged to a man, and now I’m very much not. And so I just wanted to allow myself the freedom to match my outside to what I feel like on the inside, and that’s what I’ve done”), dealing with negative press (“I think it was right after I got out of rehab in 2018. I saw an article somewhere that said I was morbidly obese, and that is the most triggering thing that you could possibly write about somebody with an eating disorder. That sucked, and I wanted to quit, I wanted to use, wanted to give up”), and says she is no longer wholly sober (“It’s just really important to note that just because I am trying this doesn’t mean it’s for everybody. Just like the dogmatic views of complete sobriety, that isn’t a one size fits all solution for everybody”).

-Reviews of the first two episodes of her docuseries (which dropped this week on Youtube, while the final two will debut in a couple of weeks) praise Lovato for her candor.

–Noah Centineo took to social media to flaunt his muscle gains in preparation for his upcoming superhero role. This feels like… too much?

–Chris Evans showed off his chest tattoos during interview and the internet went wild. Weirdly, this doesn’t feel like too much? I don’t make the rules, guys.

–Meghan McCain continues to be the least self-aware person ever, saying on The View today: “We’ve only had one Asian American host co-host host this show. Does that mean one of us should be leaving because there’s not enough representation? We’re talking about — is identity politics more important than the qualifications for the job?” She knows the only reason she got that gig was because of who her father was, right? She has the opposite of imposter syndrome.

-Oh god. It turns out the Synder cut isn’t exactly the cut he wanted, because Zack Synder wanted the final scene of the four-hour comic to feature the Green Lantern John Stewart and not the Martian Manhunter, and that he filmed the new Green Lantern scene in his driveway last year during the pandemic with “an amazing actor” but the studio took it out. I’m so tired.

-Most of the Glee cast (minus Lea Michele) will come together for a tribute to the late Naya Rivera at the GLAAD Media Awards — with Demi Lovato set to introduce it.

–Ryan Murphy cast his go-to Evan Peters in the lead role for his upcoming Netflix series about Jeffrey Dahmer.

–Issa Rae just inked an eight-figure, five-year deal with WarnerMedia, keeping her in the HBO fam.

–David Duchovny is heading back to Showtime as a series lead, this time for an adaptation of his latest novel.

-Splash News and Picture Agency, one of Hollywood’s biggest paparazzi agencies is filing for bankruptcy. Despite some headlines, it’s not because Meghan Markle sued them for invading a ‘private family outing’ in Canada last year.

–Miley Cyrus penned a sweet letter to her Hannah Montana character in honour of the 15th anniversary of the show’s premiere.

–Justin Bieber has returned from his tropical vacation — and one of his first stops was at a prison to spread the word of the bible.

-The Tina Turner documentary that airs this weekend on HBO considers her life and career well beyond her awful first marriage.

-Despite the TV production slowdown, there’s actually quite a few interesting-looking shows premiering in the next few weeks.

-Mary Goes Round, starring Aya Cash, is now streaming for free on CBC Gem. I really dug that movie.

-Speaking of Aya Cash, she and William Jackson Harper play a recently split couple who attend her sister’s wedding in the We Broke Up trailer.

–Anna Kendrick, Toni Collette and Daniel Dae Kim are on a mission to Mars in the trailer for Netflix’s Stowaway.

Jennifer Lopez Gets Glamorous for Glamour

Buffy Mania Overtakes The Internet — And I Love It!