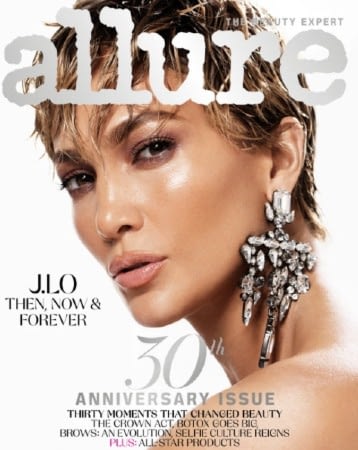 -I love Jennifer Lopez’s pixie cut on the cover of Allure, but I’m assuming it’s a wig since her locks were flowing at the Super Bowl last weekend.

-In her cover story with Health magazine, Rosario Dawson opens up about raising her 17-year-old adopted daughter from age 11. “To have a young person move in with you and to have to really consciously work through triggers and that kind of stuff is a really different thing than being pregnant and having your baby grow up in front of you—to be able to see how we’re getting closer and closer. We are a family, and it’s beautiful.”

-This is a great piece on Chadwick Boseman, who covers Vanity Fair’s Awards Extra issue.

-I have never written a story a quickly as I did this one about Charisma Carpenter calling out Joss Whedon for a hostile and abusive work environment because I didn’t need to look up any dates or details. Buffy fans have heard these rumours for years, and know what she’s previously alluded to at conventions. It felt like it was only a matter of time after Ray Fisher‘s allegations, not to mention Whedon abruptly leaving his HBO series before it premiered, for this all to come out. Since Carpenter’s tweets, Buffy alum Tara Benson called the show “a toxic environment,” Michelle Trachtenberg said Whedon’s behaviour towards her teen self was “not appropriate,” while Sarah Michelle Gellar gave a more vague statement about not wanting to be forever associated with his name.

–Shia LaBeouf just parted ways with his agency, CAA. He’s been receiving treatment for over five weeks, a source tells Variety, and the actor is currently living at an inpatient facility.

-HBO Max has a straight-to-series order for an adult-focused animated Scooby-Doo origin story about Velma, from exec producer Mindy Kaling, who will also lend her voice in the lead role.

-The legal battle over Britney Spears and her conservatorship is set to return to court this week, days after a New York Times documentary outlined the ongoing legal battle. Spears is reportedly hopeful the doc will help turn the tide.

-I really liked this piece on the Britney doc’s structure and why giving it a linear timeline was the correct framing device.

-Speaking of the Britney doc, I loved this piece on how Justin Timberlake should apologize for weaponizing his relationship with women. “Timberlake got to do whatever he wanted for years. Someone let this man do a full minute of mediocre beatboxing in ‘Rock Your Body’ and then we went out and bought the album and thought, Yes, I want to hear this at every wedding I go to for the rest of my life. But he didn’t do any of this alone; he just learned his lesson well: that you can be taller if you stand on the shoulders of a woman with no protection. For many of us, it was easier to just let him win.”

–Esmé Bianco says Marilyn Manson whipped and scarred her on a music video set, and once chased her around their apartment with an axe.

-Our first look at Elle Fanning in season two of The Great show our Empress with a bun in the over.

–Lena Dunham had to release a statement on the use of real cat corpses in her HBO Max’s show Generation, denying knowledge of the incident. She said “I don’t use animal cadavers in any of my work, ever, and I was not on set or aware that they were used in a recently shot scene depicting a biology classroom assignment.”

–Reese Witherspoon was spotted visiting Laura Dern on her birthday.

-#FireGinaCarano is trending worldwide on social media after Gina Carano shared a post that compared being a Republican to being a Jew during the Holocaust. Seriously, how long is Disney going to let her keep doing this stuff? Don’t most talent contracts have a morality clause?

-Here’s the latest trailer for Nomadland.