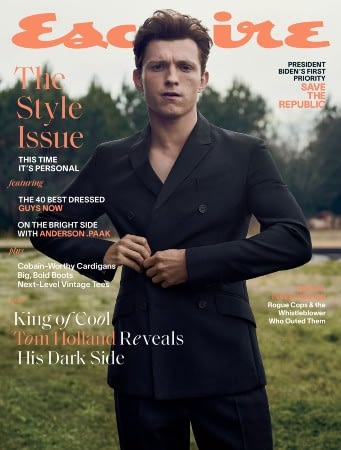 –Esquire profiled Tom Holland, and you can tell how much the fact that Marvel refuses to trust him with plot secrets anymore messes with his head. He says of the upcoming Spider-Man film: “In [Endgame], Robert Downey Jr.’s funeral scene, for the longest time I was under the impression that it was a wedding. I’m 100 percent sure that they’re still tricking me.” He does seem more confident that the rumours of Tobey Maguire and Andrew Garfield making cameos aren’t true, though. “No, no, they will not be appearing in this film. Unless they have hidden the most massive piece of information from me, which I think is too big of a secret for them to keep from me.”

–Britney Spears’ boyfriend Sam Asghari slammed her dad in post following release of the Framing Britney Spears documentary. He posted on Instagram: “Now it’s important for people too understand that I have zero respect for someone trying to control our relationship and constantly throwing obstacles our way. In my opinion Jamie is a total dick.” When TMZ caught up with him later, he added “Once he starts treating his daughter right, then we can be on good terms.”

–Spears reportedly is aware of the doc but hasn’t yet watched it. She did just tweet this though: “Each person has their story and their take on other people’s stories…Remember, no matter what we think we know about a person’s life it is nothing compared to the actual person living behind the lens.”

-Meanwhile, a video of Craig Ferguson refusing to mock Britney Spears has gone viral. I remember when he said this because a lot of us who were working at an outlet covering celebrity news began feeling the same.

–Sandra Bullock and Brad Pitt are teaming up for a new action movie.

–Pedro Pascal continues to seem like a great human. Lux Pascal opened up about her brother’s reaction to her coming out as a transgender woman: “Pedro is an important part of this. He was the first person to gift me the tools that started shaping my identity. [When I came out to him, he said] ‘Perfect, this is incredible!'”

-Vulture has ranked all 515 original Netflix movies. I’ve only seen 3 of the top 20.

-The National Society of Film Critics has released a statement regarding Variety’s apology for its review of Promising Young Woman. This is such a tough one. On one hand, critics should be able to express opinions. On the other, that review had some brutal sentiments about her appearance that an editor should have caught. And this statement makes it seem like Carey Mulligan objected to it because it might affect her chances in awards season, which is gross.

-I’m still not sure how it happened, but my friend and I ended up watching The Best Man again last weekend. And now comes news that the entire cast is returning for a limited series.

-The CW has ordered a pilot for a live-action Powerpuff Girls reboot from Diablo Cody, and Ava DuVernay’s superhero drama Naomi.

–Morgan Wallen’s sales have spiked since he was caught on tape using the n-word because we live in a garbage world.

-Slate got a lot of people angry yesterday for this truly dumb piece on romance novels. I stopped reading after the first couple of paragraphs when I saw a Fabio reference, which is a dead giveaway that they’re ignorant about what’s going on these days in the genre. If your outlet has to cover romance for Valentine’s Day, maybe get a writer who recognizes that it’s a billion-dollar industry and doesn’t hate all pop culture that’s largely by and for women? (FWIW, I liked this piece about which book to read based on your fave romcom — Bet Me is the best! — and this podcast on how the perfectly structured The Hating Game changed the chicklit genre).

–Joel McHale and Kerry Bishe play a couple whose marriage is put to the test in the trailer for Happily.