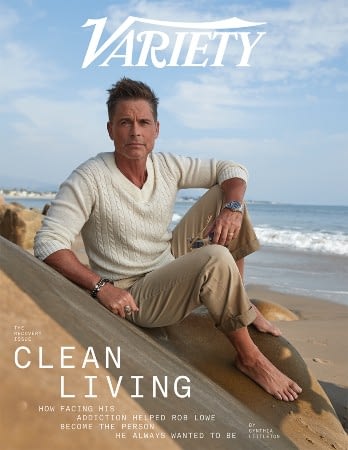 –Variety’s second annual Recovery issue features Rob Lowe, who reflects on how Hollywood’s attitude towards illicit drug use has changed from when he was coming up: “This was just how the business was back then. Cocaine was the thing that successful people did. There was always that wonderful moment when as an active drug abuser you’d go on the set and figure out which department was selling the coke on the set. It was no different than craft services. Where are the Red Vines, and where is the great Peruvian blow? Those days are long, long, loooong gone.”

-Singer Phoebe Bridgers says Marilyn Manson once bragged to her about his “rape room”: “I went to Marilyn Manson’s house when I was a teenager with some friends. I was a big fan. He referred to a room in his house as the ‘r*pe room’, I thought it was just his horrible frat boy sense of humor. I stopped being a fan. I stand with everyone who came forward.”

-This is a good piece on how Evan Rachel Wood has used Instagram this week: not only to come forward with her allegations against Manson, but to instruct other accusers how to go to the police — and to indict past media coverage of him.

-Vanity Fair takes a deep dive into deuxmoi, Instagram’s accidental gossip queen. Hollywood is trying to unmask her (and this article’s writer thinks she has, but keeps the name to herself) while her type of reporting continues to draw eyeballs in this party-less, red carpet-less celebrity vacuum we’re all living in these days.

-As part of the British Vogue cover story, Angelina Jolie did a “what’s in my bag?” video. There’s also a new photo of her and the kids watching the TV on election night.

-In news that will surprise no one, Variety is citing “multiple well-placed sources” that Armie Hammer was asked to leave those two high-profile projects he recently exited.  His camp is circling the wagons in this article, with a source close to the actor telling Variety “He has never eaten human flesh, he has never drank blood, he has never cut off a toe, he has never locked anybody in a cage, or whatever else is in these crazy messages. These messages definitely shouldn’t be taken literally – even if he did text them.”

-Even a writer on Emily in Paris thinks I May Destroy You should have been nominated.

-The SAG Awards nominations came out today, and are much more reasonable.

-Here’s a good rundown of the movies that generated the most buzz at this year’s Sundance. Passing is the one I keep hearing about. The premise doesn’t seem like something Rebecca Hall would be the best person to tackle, but the reviews are strong.

-It looks like Nick Cannon has been forgiven for his anti-semitic comments. ViacomCBS has reestablished their working relationship.

-Meanwhile, Cannon has tested positive for covid and Niecy Nash will fill in as host of The Masked Singer.​

-Southern Charm’s Madison LeCroy insists she only talked on the phone with A-Rod and never had a physical relationship with him, but the genie is out of the bottle.

-Disney+ will drop Rodgers & Hammerstein’s Cinderella starring Brandy and Whitney Houston next week — and I was NOT expecting the excitement about this on my TL. How did I not know how beloved this movie is?

-This is a great interview with Owen Wilson, who says Jeff Goldblum changed his outlook on life. “He’s just this very positive person. Even “positive” isn’t a strong enough word…Sometimes you meet people who aren’t interested in bonding over shared dislikes. They only want to connect over things they’re excited about, not giving into any kind of negative stuff. I remember that about Jeff, even though we didn’t work together that much — I just appreciate how he was.”

-I don’t watch Riverdale, but the preview for next week — when the show jumps seven(!) years into the future — seems awesomely bonkers.

-I’m not surprised that Renee Zelleweger is making the jump to TV. I am surprised that it’s network TV. She’ll star in an NBC show based on a true crime podcast.

-Here’s the trailer for Netflix’s Behind Her Eyes. I wonder if they’ll keep the book’s absolutely insane twist ending…