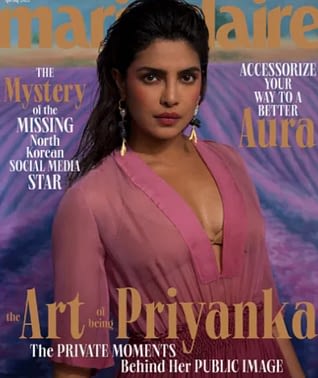 –Priyanka Chopra is on the cover of Marie Claire, and says the pandemic has brought her closer to hubby Nick Jonas. “Both of our schedules are so crazy individually that there was no world in which we would have ever had six months together. It only took a global pandemic for that to happen.”

-In a new podcast FKA Twigs talks about the “massive wake-up call” in her allegedly abusive relationship with Shia LaBeouf: when she says he threw her against a car at a gas station and “basically strangled” her in front of bystanders.  “Nobody did anything. That was a really low moment for me because I felt like I would never be believed…Nobody stepped in. For me, that was a real moment of like, ‘Okay, no one is going to believe me,’ because I’m the type of person if I saw something happening, I will go and help somebody, that’s just who I am.”

-Meanwhile, twigs returned with the music video for “Don’t Judge Me,” her first full song since her acclaimed 2019 album, Magdalene.

–Elliot Page and Emma Portner have announced plans to divorce after three years of marriage. The pair separated last summer.

–Ioan Gruffudd‘s wife says he’s blindsided her with a divorce, tweeting “My beloved husband/soulmate of 20 years, Ioan Gruffudd, has announced he is to leave his family, starting next week. Me and our young daughters girls are very confused and sad. We haven’t been given a reason except that he ‘no longer loves me’.”

-Deux Moi published a rumour that Cardi B and Channing Tatum are being eyed for a remake of The Bodyguard and for the love of gawd Hollywood, just create some new IP already.

–JoJo Siwa revealed she had been swatted after coming out. “Basically what happened is we were at our house and all of a sudden there was a whole bunch of police that were telling us to come outside the house and we didn’t know why.”

-Variety’s excellent Actor on Actor pairings continue, with today’s interview between Carey Mulligan and Zendaya. Mulligan talked about calling out Variety’s sexiest review of Promising Young Woman (“It made me concerned that in such a big publication, an actress’ appearance could be criticized and it could be accepted as completely reasonable criticism. It’s important to call out those things, because they seem small & they seem insignificant…But it stuck with me because I think it’s these kind of everyday moments that add up”), while Zendaya expressed gratitude for her Disney roots (“That’s where I started, and I learned so much from that experience… I embrace it a little bit. It’s part of my heritage to a degree”).

-On last night’s Tonight Show, Jared Leto delved deeper into his unique experience finding out about the pandemic following a 12-day silent meditation retreat where he had no access to phones or television. I remember the total panic of that week and this being the only story that made me smile.

–Gillian Anderson appeared on Seth Meyers’ show and talked about busting a move to Lizzo on the set of The Crown. I want to attend Olivia Colman‘s dance class!

-I tried to watch Jennifer Lopez and Matthew McConaughey’s Instagram Live today but I think his recent political comments have ruined him for me.

-A fan asked Lindsay Lohan to come out to her parents for her in a Cameo and it was incredibly sweet.

-If you’ve ever been to a Flaming Lips concert, you’ve probably seen lead singer Wayne Coyne bounce around the crowd in a giant hamster ball. Now the band has taken it to the next step during the pandemic, have staged a unique pair of gigs in Oklahoma with both the band and their audience inside individual inflatable balls.

–Penélope Cruz, Marion Cotillard, Lily-Rose Depp, and Vanessa Paradis were some of the only guests seated at Chanel’s socially distanced front row.

-Never Rarely Sometimes Always leads the Spirit Awards nominations. I am the worst but I couldn’t get into that movie. If I saw it in a theatre during normal times I bet I would have loved it, but pandemic me has lost the ability to sit through slow, dialogue-sparse films.

-For some reason a skateboarding magazine interviewed director Werner Herzog and it was weirdly great.

-There’s a Revenge reunion happening in a couple weeks, and it sounds as dramatic as the show. Christa B. Allen said she’s been a victim of “bullying” after being left off of the guest list. Madeleine Stowe, who is also not attending, seemed to take her side, saying of their time on the set, “I saw her endure some things at 18 years of age that would bring a weaker person to their knees, but she has such inner dignity that she gracefully kept moving.”

-The stuff going on with Kellyanne Conway and her daughter is wildly disturbing.

-In the trailer for the new Netflix series Ginny & Georgia, a high schooler discovers the perils of having a hot mom.

What’s Going On with Prince Harry and Prince William?