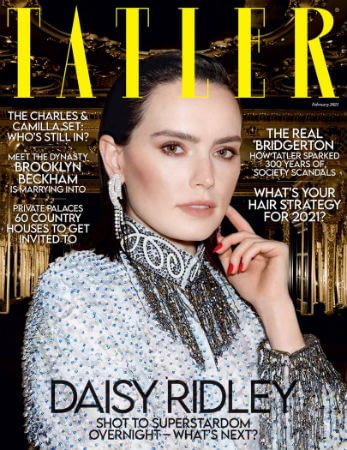 –Daisy Ridley covers the new issue of Tatler and opens up about being called “aggressive” following her Star Wars fame. “I’ve been told that I’m intimidating. That was on [the set of upcoming film] Chaos Walking. I was having my hair done, having my wig put on. I remember thinking, ‘God, should I be smaller? Should I be quieter?’…I’ve been called aggressive, too. My energy is ‘quite aggressive.’ That was during a meeting with a director. I was thinking: ‘But why? Is it because I maintained eye contact? Is it because I’m passionate about what we’re talking about?’ I dunno. You have that horrible sinking feeling of, ‘God, do I not come across the way I think I do?'”

-I feel like Hilaria Baldwin thought she was doing this NYT interview for damage control, but the writer didn’t get the message. My fave paragraph: “‘One of the most important places to start is this idea of boundaries,’ said Ms. Baldwin, who invites social media followers into her home life with Mr. Baldwin and their five fair-haired young children by routinely sharing images like her underwear-clad workout routines, innumerable pregnancy selfies and the sponsored diaper-ad videos of her infant son.” I also loved the source who insisted on anonymity because she feared Alec Baldwin “would punch her.”

-Also, people are really angry (as they should be) that New York Magazine is mostly crediting Tracie Egan Morrissey for breaking the story. It definitely blew up when Morrisey posted about Baldwin on Instagram, but most of the legwork was already done by this @lenibriscoe thread on Twitter.

-The week between xmas and new year’s is always packed with celeb split announcements in an attempt to slide under the radar, but this week is slower than most. All we’ve gotten so far is Lindsey Vonn and P.K. Subban announcing the end of their engagement, and Tyrese Gibson splitting from his wife.

-Another day, another round of pap shots of Shia LaBeouf and Margaret Qualley jogging. Interesting, seeing how his attorney told Variety last week: “Shia needs help and he knows that. We are actively seeking the kind of meaningful, intensive, long-term inpatient treatment that he desperately needs.”

–Billie Eilish says that she didn’t intentionally get a mullet; her hair “fell out in chunks” after having it coloured.

-In a video posted on Twitter, Anthony Hopkins celebrates 45 years of sobriety and reveals that he drastically changed his life after realizing he was “headed for disaster.”

-Also, Chrissy created a surprise math competition for John Legend’s birthday. This sounds like my own personal hell, but he looked into it.

–Selena Gomez called out Facebook for spreading misinformation about vaccines and covid.

-I’m loving that our Bridgerton thirst is being quenched with interviews with the hunky stars.  Regé-Jean Page (who plays Simon) talks about warning his loved ones about the nudity (“I’ve been sending out warning texts to my family, like the family WhatsApp group is full of exclamation points in the middle of flashing red light emojis just kind of going, ‘I know everyone’s kind of excited for this, but just so you know what you’re getting into, there is some de-robed Regé going on this Christmas.'”) Meanwhile, Jonathan Bailey (who plays Anthony) talks about the impressive sideburns he sports in the show (“They are real, baby. I fertilize them every day like a bonsai tree.”).

-I like this interview with 48 showrunners revealing the series that got them through 2020. It feels like The Queen’s Gambit, Normal People and HBO’s How To With John Wilson got the most shoutouts, but Dan Levy picked Sex Education, Greg Berlanti chose The Crown, and Lena Waithe opted for I May Destroy You.

–Robin Wright retreats to the harsh wilderness of the Rockies after a family tragedy in the Land trailer.