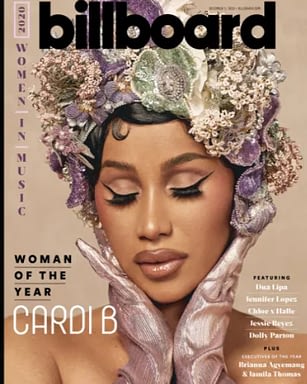 –Cardi B is Billboard’s Woman of the Year — and what a year it was. In the interview she says, “I’m not gonna front — this has been a bad year due to work. You can’t do shows and you gotta wait on deals. But I’m really happy because I have spent so much time with my family. I feel like I haven’t laughed like I have in 2020. My daughter is so funny, and I’m with her every single day. That’s what brings me happiness.”

-Wow wow wow – the news that Warner Bros will stream ALL their 2021 movies on HBO Max on the same day as their theatrical debut is a huge, seismic shift for the movie industry. There’s lots of debate about whether this marks the death toll for movie theatres or if this was just because HBO Max needed Warner Bros’ entire slate to save it (I can’t wait to read tomorrow’s think pieces!) but either way, even after we get a vaccine and life returns to normal, it’s going to be hard to put the toothpaste back in the tube.

-Meanwhile, Canada will still get all those movies as theatrical releases. They’ll eventually come to Crave someday, maybe.

-Fans are convinced Taylor Swift and Joe Alwyn are engaged because in her re-recorded version of “Love Story”, the lyrics have changed from “Baby, just say, ‘Yes’” to “Baby, just said, ‘Yes.’”

-God, how much to you wanna bet that George Clooney regrets talking about the Flowbee? He gave a live demonstration on Kimmel.

–Chet Hanks tried to defend his controversial use of Jamaican patois in a Clubhouse chat.

-Ok, I’ll give it to the Kardashians. This Facetime prank is pretty great.

–Daniel Radcliffe appeared on Hot Ones and in between wing tasting, he talked about why he won’t join social media. “When I was younger, not anymore thanks god, I would like to look up comments about myself on the internet and read s–t like that. That is an insane and bad thing to do. And to me, like Twitter and everything just feels like an extension of that. Unless I want to go just read all nice things about myself, which also feels like another unhealthy thing to do.”

–Glenn Close doesn’t think Gwyneth Paltrow should have won her Oscar for Shakespeare in Love, which might mean a lot more if Close didn’t say it while promoting the critically lambasted Hillbilly Elegy.

-Superstore will end its run this spring with 15 episodes, rather than a full 22. The final season begins January 14.

-I was worried when I saw that Nora Roberts was trending but it’s just because she clapped back at some ninny who tried to explain to her how publishing works. I want “Stop. You literally don’t know what you’re talking about” on a tshirt.

-The only person in the audience at the Chanel Métiers fashion show was Kristen Stewart.

–Aubrey Plaza became a paparazzi target during quarantine because she lives near Brad Pitt.

-I bet the unmasked fan who approached Gloria Estefan and gave her covid now feels like shit.

–Ralph Fiennes makes a rare discover in the trailer for Netflix period drama The Dig.