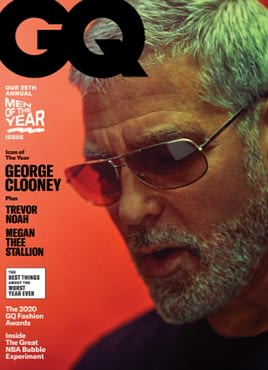 -In his new GQ profile, George Clooney talks about how Amal has changed his life. “I was like, ‘I’m never getting married. I’m not gonna have kids. I’m gonna work, I’ve got great friends, my life is full, I’m doing well.’ And I didn’t know how un-full it was until I met Amal.” He also talks about a brutal motorcycle accident he had when shooting Catch-22 (“When I hit the ground my mouth—I thought all my teeth were broken out. But it was glass from the windshield”), and why he prefers to watch others get into online fights (“I have much more fun watching Chrissy Teigen. Somebody steps into her world and you go, ‘Oh, I wouldn’t do that, dude.’ It’s so much fun. Like somebody who thinks they’re really smart, and you just go, ‘Ugh, dude. You brought a knife to a gunfight.'”)

–Isaiah Washington is once again calling out Katherine Heigl over the Grey’s Anatomy drama that led to his 2007 firing.  I mean, she stood up for a costar when Washington used a homophobic slur so I don’t understand why he keeps reminding us of it.

–Lil Wayne has been charged with weapons possession in a South Florida federal court, and faces up to 10 years in prison if convicted.

-Meanwhile Swift, who is free to re-record songs from her first five Big Machine-issued albums as of this month, hit back at Braun, saying that she didn’t get a chance to buy back her masters unless she signed an NDA.

-We’re still waiting on the People’s Sexiest Man Alive, but we know that Dan Levy is on the list.

–Zack Snyder has unveiled a new black and white trailer for his director’s cut of Justice League, and it still holds zero interest for me, but if you’re looking for a a never-before-seen shot of Darkseid, knock yourself out.

–Richard Schiff, who played Toby on The West Wing, has been hospitalized after testing positive for COVID-19.

–Rachel Bloom details the whirlwind journey her show Crazy Ex-Girlfriend had to television in this audio excerpt from her new book.

-Watch the trailer for Vanessa Kirby and Shia LaBeouf‘s emotional drama Pieces Of A Woman, which is coming to Netflix. Saw this one at TIFF a few months ago and it’s good but crushing.

Kieran Culkin on His Succession Success