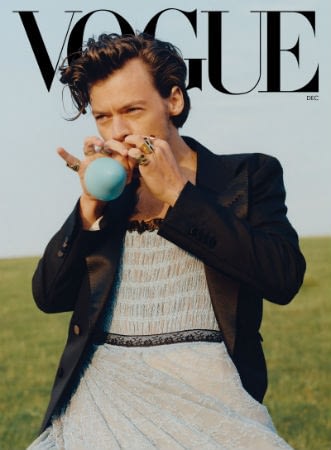 –Harry Styles is the very first male cover star of US Vogue — and he does it in a dress. J’adore!

-In his new interview with Vanity Fair, Jacob Elordi praises his Euphoria co-star (and ex-girlfriend) Zendaya. “She’s a power unto herself and so talented. Such a sweetheart.”

–Taylor Swift was interviewed by Beatles icon Paul McCartney, and opened up about her relationship with Joe Alwyn, saying he understands her A-list lifestyle. “I think that in knowing him and being in the relationship I am in now, I have definitely made decisions that have made my life feel more like a real life and less like just a storyline to be commented on in tabloids. Whether that’s deciding where to live, who to hang out with, when to not take a picture—the idea of privacy feels so strange to try to explain, but it’s really just trying to find bits of normalcy.”

–Melissa McCarthy (though more likely her networks’ publicist) accidentally promoted a charity that has ties to homophobic and anti-abortion policies and apologized. “There’s no other way to say it,” she said in an Instagram video. “We blew it. We made a mistake and we backed a charity that upon proper vetting stands for everything that we do not.”

-During a recent interview, Kate Mara says Heath Ledger looked out for her on the set of Brokeback Mountain. “I was 19, he was only a few years older than me, yeah, it was pretty crazy, but he was the sweetest thing…he really took me under his wing because I hadn’t worked that much.”

–Will Smith gets teary-eyed in the new Fresh Prince Of Bel-Air reunion trailer.

-I can’t believe Grey’s Anatomy pulled off that surprise cameo last night (don’t click if you don’t want to be spoiled). Ellen Pompeo says she came up with the idea while she was hiking with said person in Malibu.

–Amber Heard has thrown water on the rumors that she won’t reprise her role of Mera in Aquaman 2. She said she’s “so excited” to film it sometime in 2021, and shot down “paid” online efforts to have her booted from the sequel.

-The cast of The Matrix 4 broke quarantine protocols in Berlin and threw a party. I expect better from Keanu.

–Ellen Degeneres has released the Fall edition of her “Be Kind” subscription box. So people are still believing the kind thing, huh?

–Dolly Parton talked to Oprah about getting older and the miracle of plastic surgery. “I don’t think about my life in terms of numbers. First of all, I ain’t never gonna be old because I ain’t got time to be old. I can’t stop long enough to grow old.”

-TMZ emailed the Secret Service about Eminem’s Trump lyrics, which kicked off an investigation into the rapper.

-In the trailer for Lifetime’s The Christmas Setup, Fran Drescher stars as a mom who tries to matchmake her gay son. This is the kind of holiday movie I can get behind. It stars Arrow’s Ben Lewis and his real-life husband Blake Lee.

-Drew Barrymore stars in The Stand In trailer.