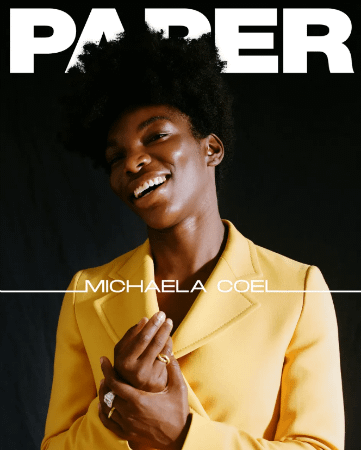 -I May Destroy You creator and star Michaela Coel covers the new issue of Paper. I really want her to get Phoebe Waller-Bridge levels of fame and acclaim. She deserves it.

–Jennifer Garner made a compelling case that Schitt’s Creek’s Moira Rose is the adult version of her Alias character.

-Riverdale’s KJ Apa got a metal shard in his eye and had his hairstylist buddy remove it — all on Instagram. This definitely feels like something a medical professional should have handled.

–Kanye West posted a series of tweets late Monday claiming his wife and Kris Jenner were trying to have him locked up on medical grounds, comparing himself to Nelson Mandela and suggesting the movie Get Out resembled his own life. His family is reportedly not happy, while Dave Chappelle flew to see him. This is a good piece on how the media needs to carefully navigate how to talk about his actions and his mental health.

-Are we going to be having similar conversations about Talib Kweli soon?

–Hayden Panettiere is speaking out about the domestic violence she allegedly experienced at the hands of her ex: “I am prepared to do my part to make sure this man never hurts anyone again.”

-This is a crazy article on how Prince Andrew and his team had no idea how detrimental that interview he gave to BBC would be until after it aired. Said interviewer Emily Maitlis: “We’d assumed that he’d want to show empathy to the victims or pin the blame on Jeffrey Epstein. We couldn’t understand why he hadn’t done that…We know that the palace was happy with the interview. We had plenty of engagement with them after it went out. I think their shock was not at the interview itself, but the reaction it caused in the days and weeks afterwards.”

-Also, it’s ridiculous that the British press are running stories about how Prince Harry is seen as a ‘liability’ for the monarchy when Andrew is RIGHT THERE.

-This profile on Andy Samberg is a delight, especially his take on Portrait of a Lady on Fire.

-People are really getting won over by Zac Efron‘s new travel series.

-BET will air select episodes of The Good Fight that deal with racial biases, white privilege, voter fraud and more. This is great because that show is so good (especially its last abbreviated season) that it deserves to be seen by a wider audience than CBS All Access can deliver. There was recently an episode in which an alternate reality plays out where Hilary won, and I think about it A LOT.

-Speaking of great shows, the Happy Endings reunion is, by a wide margin, my favourite bit of pop culture to come out of quarantine. It’s now available on YouTube.

-The Q&A with the cast that immediately followed it was also wonderful. I adore that Elisha Cuthbert (who is quarantining in PEI) always makes sure the East Coast Lifestyle logo is visible whenever she does a Zoom. Way to support a Maritimes business!

-Really weird but true: An armed gunman in Ukraine released 13 hostages after the country’s president consented to his demand to recommend the 2005 film Earthlings starring Joaquin Phoenix.

–Keanu Reeves‘ girlfriend, Alexandra Grant, had to get a restraining order against his stalker.

-Look, it’s all fine and good if Dave Franco and Alison Brie wrote a romcom, but that doesn’t mean they have to crap on all the romcoms that have come out in the last 20 years.

-Netflix canceled the production of Turkish original series If Only after the Turkish government demanded an openly gay character be removed from the script. I seriously don’t understand the Turkish rules. I watched all of the romcom Erkenci Kus and the main couple only kissed like 3 times in 50+ episodes because the show got fined but the government each time, but now I’m watching the lead guy’s new show and he plays a womanizer who beds a different girl every night. Their morality laws confuse me.

–Megan Fox goes up against a lion in trailer for Rogue.