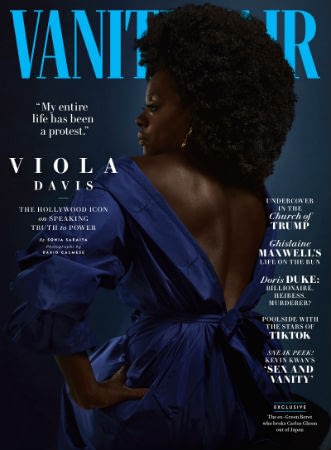 –Viola Davis is on the stunning new cover of Vanity Fair, in which she talks about the BLM movement not being her first form of protest (“I feel like my entire life has been a protest. My production company is my protest. Me not wearing a wig at the Oscars in 2012 was my protest. It is a part of my voice, just like introducing myself to you and saying, ‘Hello, my name is Viola Davis’ “) and the difficulties of being Black in Hollywood (“We know as women, when you speak up, you’re labeled a bitch—immediately… As a woman of color, there is very, very, very little you have to do. All you have to do is maybe roll your eyes, and that’s it”).

-The Viola Davis cover was shot by Dario Calmese, marking the first time in its 100+ year history that Vanity Fair has had a Black photographer shoot a cover. He told NYT how it’s meant to be an image of protest, referencing an 1863 photo of a slave titled “The Scourged Back.”

–Meghan Markle urged girls to “build each other up” and to “rebuild the world around them” in a powerful Girl Up Leadership Summit speech. Everyone’s going gaga over her longer hair.

-All of the Glee cast’s memories and stories that they’re sharing of Naya are heartbreaking.

-I spent a very long time on this thread of Naya’s best performances.

–Chris Evans‘ website, A Starting Point, launched today. It aims to, in its own words, “create a bipartisan channel of communication” through short videos from elected officials. I’m not sure both-sides-ism is what the world needs right now, but at least they’re saying it’ll be “fact-based and fact-checked.”

-The cast of Happy Endings is set to reunite and perform new scripted material from the writers of the series as part of a fundraiser. I recently rewatched that show and man, it still holds up.

-A federal judge has rejected a $46.8 million settlement of the Harvey Weinstein sexual misconduct cases, saying it is not suitable for a class action. “The idea that Harvey Weinstein can get a defense fund ahead of the claimants is obnoxious.”

–Bryan Fuller keeps teasing another season of Hannibal and honestly there’s nothing I want more.

–Trina McGee, who went public with the racism and general poor treatment she received from three stars of Boy Meets World when they were filming, said her relationship with two of them (Will Friedle and Danielle Fishel) has improved.  However, she added “I do not talk to Ben Savage at all.”

–Christopher Nolan‘s Tenet is likely to be delayed again, as theaters in LA are shut down again.

-In Johnny Depp‘s libel suit against The Sun, the court saw a pic of him passed out and covered in ice cream.

–Patrick Stewart‘s quotidian sonnet readings are often the highlight of my day. He read number 80 today — on the eve of his 80th birthday. His BFF Ian McKellen took over sonnet 81.

-Peacock, NBC’s new streaming service, launches today for free. In Canada, it looks like most of the new shows are coming to Corus.