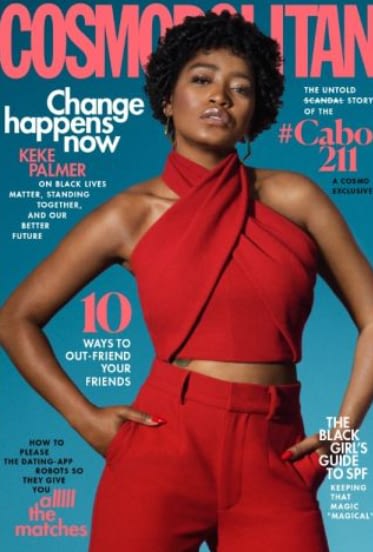 –Keke Palmer is on the new cover of Cosmo, where she talks about going viral with her protest speech, and fighting for a better future.

-The New York mag’s TV issue features another stunning profile b E. Alex Jung – this one on Thandie Newton. He gets her to open up about her abuse at the hands of a director when she was 16 being classified in the press as “an affair,” the time Sony head Amy Pascal tried to get her to do Charlie’s Angels by reeling off stereotypes to her of how to be a more convincing Black character, and what it’s like to work with Tom Cruise: “I was so scared of Tom. He was a very dominant individual. He tries superhard to be a nice person. But the pressure. He takes on a lot. And I think he has this sense that only he can do everything as best as it can be done.”

–Lily James and Chris Evans were seen together in London on Saturday night. I have serious questions about his quarantine protocol. Even if he was allowed to be exempt from the 2 week quarantine, and even if she’s in his bubble, should they be going to a club?

–Johnny Depp‘s libel trial kicked off today and he’s already accused Amber Heard of assault. This is going to get so, so ugly.

–Halle Berry has dropped out of playing a trans character after being called out following an interview in which she discussed the role.  In a statement, she said “As a cisgender woman, I now understand that I should not have considered this role, and that the transgender community should undeniably have the opportunity to tell their own stories.”

–Prince Harry and Meghan Markle said the wrongs of the Commonwealth’s colonial past needed to be acknowledged as one way to create a more just world. Said Harry: “When you look across the Commonwealth, there is no way that we can move forward unless we acknowledge the past. So many people have done such an incredible job of acknowledging the past and trying to right those wrongs, but I think we all acknowledge there is so much more still to do. It’s not going to be easy and in some cases it’s not going to be comfortable but it needs to be done, because guess what: Everybody benefits.”

-We’re going to run out of TV. As the shutdown drags on, and as sets remain closed, a drought is upon us.

-Oof. Harper’s Bazaar published an open letter signed by Margaret Atwood, Noam Chomsky, Salman Rushdie, JK Rowling, Bari Weiss, Gloria Steinem, David Brooks, and many others on the value of open debate and the dangers of “cancel culture.” This comes off like a bunch of privileged people with very huge platforms being afraid of losing relevance and/or angry about the unwashed masses calling them out on Twitter. They are not being silenced in any way. JK Rowling continues to spout damaging and terrible terf talk on a platform that’s giving her enormous, unrestricted reach.

–Zach Braff spoke on his podcast about Broadway star (and his friend) Nick Cordero’s final moments.

–Peter Lenkov, a top CBS showrunner for Hawaii Five-0, MacGyver and Magnum PI, has been fired and had his overall deal terminated following an HR investigation that he created a toxic workplace. “He isn’t racist or sexist or classist singularly — it’s all of it,” an insider told THR. “He’s anti-woman, anti-POC, anti-gay, and everything you’d expect. But he’d also torture straight white men if he felt like it.” This was also the guy that was in a room full of reporters at the TCAs who didn’t remember he had a Latinx writer on staff on Magnum.

-Teens are really broken up about this TikTok cheating scandal and I feel so old.

-This weekend, Hulu’s is dropping the romcom Palm Springs starring Andy Samberg and Cristin Milioti and reviews are great.

-I feel like Tom Hanks holding weekly scoldings of those who don’t adhere basic safety protocols during covid might actually make the world a better place.

-Quibi is rolling out new shows, such as Kevin Hart’s Die Hart, a series about Hart attending an action hero school run by John Travolta.

–Hilary Swank is going to space (and leaving Josh Charles behind) in the trailer for the new Netflix show Away.

–Shia Labeouf is intense in the trailer for The Tax Collector. He reportedly got a full chest tattoo for this role, which seems like a regrettable decision.