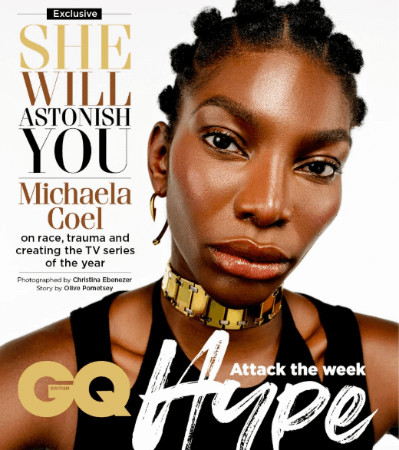 -Are you watching HBO’s I May Destroy You? I shied away from it at first because the premise sounded so bleak, but I’ve now caught up on all four episodes that have aired so far and it’s remarkable. Yes, it’s about a woman trying to figure out if she was sexually assaulted when her drink was spiked so it’s dark, but it’s also funny and charming and unpredictable. No wonder it’s already ending up on best TV show lists. Series creator and star Michaela Coel talks about the show in the latest issue of British GQ.

–Kylie Bunbury and Mark-Paul Gosselaar shot a new, socially distanced promo to celebrate Pitch being on Hulu. Rumours keep surfacing about execs wanting to bring the show back and I don’t want to get my hopes up again, but why would Disney spend money on shooting a new promo for an old show?!

–Blake Lively and Ryan Reynolds continue to step up. They donated $200K to a Nova Scotia Indigenous women’s program.

-The latest round of Actors on Actors videos feature Anne Hathaway and Hugh Jackman (she told him “[Chris Nolan] doesn’t allow chairs, and his reasoning is, if you have chairs, people will sit, and if they’re sitting, they’re not working. I mean, he has these incredible movies in terms of scope and ambition and technical prowess and emotion. It always arrives at the end under schedule and under budget. I think he’s onto something with the chair thing”), and Chace Crawford and Penn Badgley (bless Penn for saying “we can debate about whether or not that even makes sense” of his character being Gossip Girl).

–Mel Gibson has three upcoming movies booked despite those anti-Semitism comments the actor allegedly made to Winona Ryder resurfacing. Tell me more about “cancel culture.”

–Lena Dunham agreed with that viral tweet that went around earlier this week, saying that she agrees the “Hollywood system is rigged in favor of white people and that my career took off at a young age with relative ease.” Ok, I get that she had an easy ride and benefited from being a white indie movie darling with famous parents. But Girls was good (sometimes great!). How come we’re not calling out white male showrunners who get chance after chance and keep making bad shows? I know Dunham is an easy target but come on.

-365 Days star Michele Morrone confirmed that a sequel is in the works. God help us all.

–Kim Kardashian-West shared photos from daughter North’s 7th birthday, which they celebrated on their $14 million ranch in Wyoming. Is she the only little girl who’s ever asked for a pony and got it?

–This photo of Chris Pine walking out of an indie bookstore with a big bag of books while wearing a mask has sent Twitter aflutter.

-I love that Mae Whitman and Jane Levy are BFFs IRL.

-“Hi guys I’m in my gym today and yes it is the gym that I burned down, it’s still not fixed yet but I’m getting there” is the best intro ever to an Instagram video.

–Alison Brie says she regrets voicing Diane Nguyen on BoJack Horseman: “We missed a great opportunity to represent the Vietnamese American community accurately and respectfully.” I mean, ok, but this was a repeated criticism of the show while it was airing and it’s weird to position it like this is something that never occurred to her.

-Family Guy’s Mike Henry will no longer voice Cleveland. He also had a four-season spinoff on which he was an executive producer; is he giving back his royalties from that?

-Speaking of hollow, performative gestures, Hulu pulled a “blackface” episode of Golden Girls that featured Blanche and Rose in mud masks. Instead of all this virtual signaling, wouldn’t it be great if the television industry focused on the work that actually has to be done.

–Paul Walker‘s daughter snapped a selfie with all three of Vin Diesel‘s children — including Pauline, who was named after Walker.

-Ozark is coming to an end on Netflix, but it’s doing so with an expanded order for its fourth and final season.

-So now Justice League actor Ray Fisher is taking a swing at Joss Whedon? What a mess.

-HBO beat out 16 other bidders to turn Brit Bennett’s novel The Vanishing Half into a limited series. I just finished it and yeah, it’s worth the hype.

-Amazon Prime Video has launched a Watch Party feature which allows for up to 100 people to stream movies and TV together. I can’t believe Netflix hasn’t launched something like this yet.

-The hot priest met the hot couple from Normal People. So much hotness!

–Jennifer Hudson shines in the new trailer for the Aretha Franklin biopic Respect.

–Liam Neeson and his real-life son star in the Made In Italy trailer.