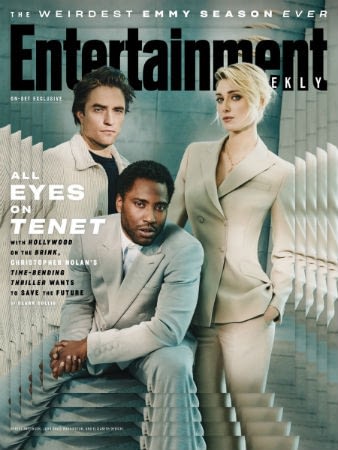 -Promo for Tenet is continuing as if the movie will still open next month, with John David Washington, Robert Pattinson, and Elizabeth Debicki interviewed by EW. (From the photos I assumed they were nowhere near each other during the cover shoot but the video suggests otherwise.)

–Matthew McConaughey and Camila Alves opened up about their philanthropic work to help students in need in the new issue of Town & Country.

-Lots of baby news today: Michelle Williams and Thomas Kail have welcomed their first child together.

-In other happy news, Raven-Symone married Miranda Maday in a surprise ceremony today.

-I didn’t think it would happen but here we are: Danny Masterson of That ’70s Show and The Ranch has been charged with raping three women at his home between 2001 and 2003. He is maintaining his innocence. Leah Remini, who put a spotlight on the accusations by interviewing the women on her show last summer, reacted on Twitter, saying “This is just the beginning Scientology, your days of getting away with it is coming to an end!”

–Jennifer Lawrence joined Twitter to issue a statement about the death of Breonna Taylor.

–Lonnie Chavis, one of the child stars of This Is Us, has written an essay in People about the experience of growing up Black.

–Angelina Jolie penned an emotional piece about the refugee crisis for Time.

-Glad to see I’m not the only one who think the CW’s new blocking trolls policy is too little, too late. I noticed the Candice Patton hate from trolls since the second she was cast, and I didn’t even follow The Flash fandom. I was more tuned into Arrow’s and saw replies to the official accounts that were absolutely brutal to Emily Bett Rickards. It also extends to how CW actress’ roles are written.

-Sopranos star James Gandolfini once said he was ready to “beat the f**k out” of Harvey Weinstein. Of only.

–Fiona Apple is donating all proceeds from TV and movie placements for two songs from her new album to charity for the next two years. Royalties from “Shameika” will go to the Harlem Children’s Zone, while the “Heavy Balloons” proceeds will go to Seeding Sovereignty. Showrunners and music supervisors should stick these songs in everywhere. I don’t want to turn on a TV show or watch a movie trailer without hearing “Shameika said I had potential!”

-A spinoff of Daria has just been ordered, which makes my Gen X heart happy.

–Lady Gaga was out shopping with her boyfriend and didn’t want to pose with a fan for a photo (understandable) so she gave the fan her leather jacket off her back instead.

–Denis Villeneuve’s Dune is heading to Hungary for reshoots.