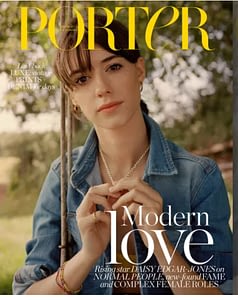 -Normal People’s Daisy Edgar-Jones covers Porter, and the accompanying interview is a delight. She talks about bonding with costar Paul Mescal (“He’ll be a friend for life”), shooting those revealing sex scenes (“You need more protection because it is a stunt, with physical manoeuvres that you need to make look realistic – just like in a fight scene”), and the odd circumstances of her first press tour (“It’s a different thing when you can do it from the comfort of your bedroom, and then can go and have a cup of tea. It’s probably a nice way to ease into it, so if I have another one, I’ll know how to light myself, at least!”)

–This video from 1983 of David Bowie grilling an MTV VJ on why they don’t play more Black artists is gold.

-Lainey waited until CTV aired their special on racism this weekend before commenting on how Jessica Mulroney wielded her white privilege over Sasha Exeter, but she posted about it today — and what a post it is. It’s long but it is well worth your time. This is brave, ballsy stuff, especially considering she’s coworkers with Jessica’s husband, Ben, on eTalk. There is a lot to digest and unpack here, but I was particularly struck by her comments about how she and Ben are not friends outside of work and this situation hasn’t helped (“I think he’s probably mad at me”), how the Mulroney camp appears to be keeping watch — and possibly chastising — people who’ve “liked” Exeter’s posts, and how more stories about Jessica might be coming but people are worried about retribution (“Before last week, before Sasha Exeter told her story, there were a lot of people in Canadian media with their own Jessica Mulroney stories. Some of them are thinking of telling them now after Sasha opened the door. But they don’t work with her husband.”) The text is juicy; the subtext even more so.

-Lainey also talked about the story on today’s episode of The Social. She mentioned how many media outlets are mischaracterizing it as a “disagreement,” while cohost Marci Ien (who is Sasha’s aunt) said, “the whole idea that someone can be threatening, bullying and feel like there are no consequences is something we really need to think about…Those times are over. There are consequences now.” Melissa Grelo also talked about how difficult it is to call out people you know: “The closer it is to home, the more discomfort arises. But that is what allyship should be. It shouldn’t be easy. The fact is, I am so uncomfortable sitting here and talking about this and if I’m perfectly honest, I’m really scared, too. Because this is within our circle of work – or friendship, for some people. And it has caused utter chaos.”

-This is a really good piece on how some white celebrities have been falling all over themselves to demonstrate “allyship” on social media, and how the price of having a huge platform has gone up. “Technology has given fans direct access to their faves’ ‘unfiltered thoughts,’ and what we’ve been seeing in the past few weeks is a paltry understanding of what’s really going on.”

-I somehow missed John David Washington‘s Esquire cover last week. His $200 million summer tentpole movie Tenet has pushed back its theatrical debut by two weeks to July. It boggles my mind that they’re still going to try to release it this summer. I don’t usually support piracy but I completely agree with this take: the studio is weaponizing FOMO for big opening weekend numbers and it’s going to get people killed.

-Meanwhile, the Oscars ceremony is getting pushed back by two months, with eligibility extended until the end of Feb instead of the end of Dec.

-Jurassic World: Dominion is the first major studio film that plans to resume production. Universal is set to pay $5 million on safety precautions and return to filming in July.

-The guilds have released protocols for what returning to work should look like.

-Insecure wrapped its fourth (and best) season last night. Loved the episode, did not love the last couple of minutes.

–Josh Gad managed to get the original cast of Ghostbusters together for a Zoom reunion.

-The trailer for Canada’s Drag Race is here and it looks likes fun!

-Netflix dropped the season 2 trailer for The Politician. Did anyone actually finish all of season 1?