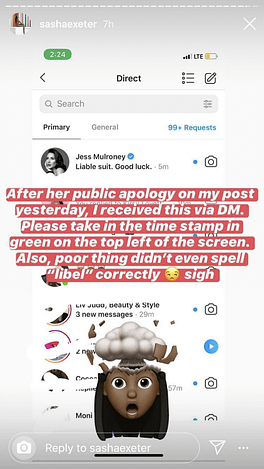 -We’ve got ourselves a homegrown scandal! Blogger/influencer Sasha Exeter called out Jessica Mulroney (wife of Ben Mulroney, BFF of Meghan Markle) over her white privilege and ‘threatening’ behavior yesterday in an Instagram video, saying: “One very prominent Canadian figure who used to be an acquaintance of mine named Jessica Mulroney took offense to a very generic call to action that I shared on my IG Stories. And what happened next was a series of very problematic behavior and antics that ultimately resulted in her sending me a threat in writing last Wednesday, June the 3rd.” She added that Mulroney reportedly threatened to speak with Exeter’s brand partners and interfere with her livelihood if she didn’t modify her BLM posts/tone. Exeter then posted a story that says “Here’s what happens when you call out someone with privilege and wealth. They publicly apologize on your post to preserve their image while privately threaten a lawsuit to try and shut you up” followed by a screenshot of a DM seemingly from Mulroney sent at 2:24am that says “Liable suit. Good luck.” [sic]

-Following an initial apology in the comments, this afternoon Mulroney posted a lengthy apology on Instagram. She does not mention her alleged legal threat.

-Meanwhile, CTV just announced that they are removing Mulroney‘s show about weddings from their schedule because her “recent conduct…conflicts with our commitment to diversity and equality.” Hudson’s Bay also announced she would no longer represent the company or Kleinfeld Canada as a fashion and bridal specialist. Good Morning America, where she often does style segments, has yet to comment.

-Daytime lifestyle show Cityline also issued a statement, saying: “Cityline fans – we want you to let you know that Jessica Mulroney will no longer be appearing as a guest expert on our show.”  Cityline’s host Tracy Moore, who’s friends with Mulroney, called her out on IG for using “her extreme privilege to potentially bury a Black sister.”

-In other news, Kelly Clarkson has filed for divorce from her husband after 7 years of marriage.

-This Janelle Monae Variety cover is divine! She talks about her support for charities during the pandemic, the importance of showing an interracial queer couple on her season of Homecoming, and the need for white people to step up and support Black voices.

-Country band Lady Antebellum has changed their name to Lady A.

-Glee actor Samantha Ware explained why she chose to call out Lea Michele. “Does Lea even know what a microaggression is? I don’t know. All that her apology did was affirm that she hasn’t learned anything. Am I calling Lea a racist? No. Does Lea have racist tendencies? I think Lea suffers from a symptom of living in this world in an industry that is tailored to white people.”

-This is a very good piece on how the gatekeeping has to change in Hollywood. “I don’t and never will want my pain, Black pain, to be fetishized or consumed by white traumavores. I’ve been too patient for too long, and that patience has run out.”

–This supercut of Sohla in the Bon Appetit test kitchen proving she has more skills and knowledge than her white colleagues (who were paid for their video appearances while she wasn’t) is devastating.

-Look, it’s not as bad as the “Imagine” video, but this clip of white actors speaking about BLM is still pretty cringe-y because they’re all ACTING. SO. MUCH. I guess they haven’t had an outlet for a while. At least this one was done by the NAACP and the link at the end is to donate to Color of Change, Bail Project and other charities.

-Whenever TV does come back, don’t expect to see as many sex scenes, fight scenes, or extras.

–Anna Kendrick remembers her time on the Twilight films as “cold and miserable,” saying “I just remember my Converse being completely soaked through and feeling like, ‘You know, this is a really great group of people and I’m sure that we would be friends at a different time, but I want to murder everyone.”

-Here’s the full trailer for Eurovision Song Contest: The Story of Fire Saga, the Netflix film starring Will Ferrell and Rachel McAdams.

Tatiana Maslany Gets Cloned on EW