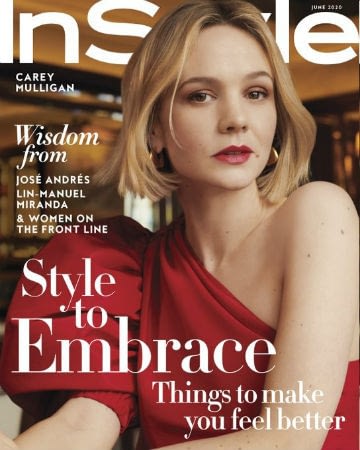 –Carey Mulligan covers the June issue of InStyle and mentioned something I’d never really considered before: British people don’t typically wear baseball caps. “I used to feel self-conscious about wearing one because I’m not American, but it’s a great way to navigate life without makeup.”

-I unfollowed a lot of (mostly white) celebrities on Instagram this weekend. If they hadn’t said a peep about what’s going on in the world or didn’t choose to go dark to cede the spotlight to those more qualified to speak on it and instead used their huge reach to show off pics from their pool or some shit, then bye-bye. I was, however, impressed by how many were using their platform to amplify black voices and spread the word about donations/resources, including some I found entirely unexpected like Grant Gustin, Blake Lively (who had a plantation wedding), Chris Wood, Timothée Chalamet, and John Cusack.

-Insecure actor Kendrick Sampson was protesting peacefully when police pointed a gun directly at him before hitting him with rubber bullets (seven times) and with a baton.

-I don’t watch 9-1-1 but I’m guessing it’s going to be tense on set when filming resumes. Ryan Guzman is facing major backlash after admitting that he uses racial slurs. Meanwhile, Oliver Stark (whose character many fans ship with Guzman’s character) has been using his social media to amplify black voices all this past week and does not seem impressed by his costar.

-I love how quickly K-pop stan Twitter worked together to crash an app encouraging Dallas residents to rat out protestors.

-In news that should suprise no one with eyeballs, Julianne Hough has split from her husband.

–Prince Andrew is permanently retiring from public life. He’s still screwing up, though! He’s reportedly been sued for failing to pay what he owned on a Swiss ski chalet.

-I didn’t know that Josh Lucas and his ex-wife Jessica Ciencin Henriquez had reconciled, but apparently they had because she just accused him of cheating on her during the pandemic.

-Remember when Silicon Valley star Thomas Middleditch gave an interview in Playboy in September where he said swinging saved his marriage? Yeah, she’s left him.

–Camila Cabello wrote about her struggles with OCD and anxiety.

-If you haven’t read Forbes’ article from Friday entitled “Inside Kylie Jenner‘s Web of Lies — And Why She’s No Longer a Billionaire” it’s worth your time. It’s hilarious that her response was “i can name a list of 100 things more important right now than fixating on how much money i have”, seeing as the whole point of the article is how her family is so fixated on how much money they have that they’ve been going to great lengths to lie about it for years.

-Insecure is having one of the best seasons on TV right now.

-Killing Eve just wrapped up one of the worst. Pajiba just called it “the new Dexter.” Ouch.

–Cush Jumbo, who plays Lucca Quinn on The Good Fight, is leaving show. She said in a statement “Due to the pandemic forcing us to shut down early we weren’t able to wrap up Lucca’s story fully and so I hope if schedules allow I can return next season to do that.”

-I’m catching up on the J.K. Rowling Twitter controversy. So…she just had a transphobic statement already copied on her clipboard? Yikes.

-Why are people still interviewing Woody Allen about this stuff? Why?

-Here’s the full trailer for HBO’s Perry Mason reboot, starring Matthew Rhys. When this was announced last year I wasn’t sure I’d be into it, but this seems like exactly the kind of comfort food I need right now.