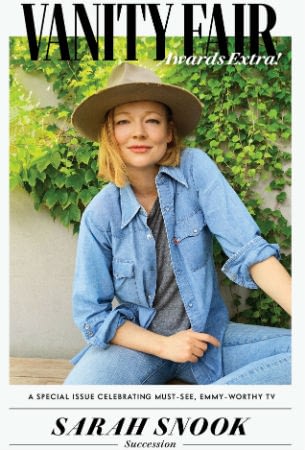 -In a show filled with exceptional performances, Sarah Snook still manages to be one of the best on Succession. In her Vanity Fair article, she says that Australians call sweatpants “Trackie Dacks,” and that her and the friends she’s quarantining with do a weekly Thursday night event called Doomsday Disco.

-Not only did Carly Rae Jepsen drop the surprise album Dedicated Side B last week, but now she says she’s created a whole new album in quarantine. I’m lucky if I remember to wash my face.

–Catherine O’Hara played herself off during her acceptance speech for the Canadian Screen Awards.

-I’m waiting for Jojo Siwa to have a Miley Cyrus–post-Disney moment.

-Now that they’ve reached a custody agreement, Brad Pitt and Angelina Jolie are reportedly getting along better.

-Celebrities including Justin Bieber, Cardi B, Kim Kardashian, Demi Lovato, LeBron James and more have spoken out on the death of George Floyd.

-Conversely, director James Gunn is getting dragged for tweeting shit like this instead of reading the room.

-A discrimination suit has been filed against Disney and CBS Studios, alleging the companies allowed Criminal Minds cinematographer Greg St. Johns to get away with sexual harassment for 14 years.

-Another day, another reason to ask “Is Grimes ok?” The Canadian singer announced a new online art exhibit and says she’ll be putting part of her soul up for sale.

-In an Instagram post, Ruby Rose talked a little bit more about quitting Batwoman. “It wasn’t an easy decision.”

-Netflix’s Space Force, which reunites Steve Carell with The Office creator Greg Daniels, is getting mixed reviews, but apparently the 10-part show improves in later episodes.

-This is a great piece on how the second Sex and the City movie singlehandedly destroyed the entire franchise’s legacy.

–Michaela Coel’s new HBO show I Will Destroy You tackles sexual assault head-on in the trailer.

–Judy Greer adopts a murderous dog in the trailer for Hulu’s Good Boy.

Cameron Diaz Talks Being 41 and Childless in Esquire