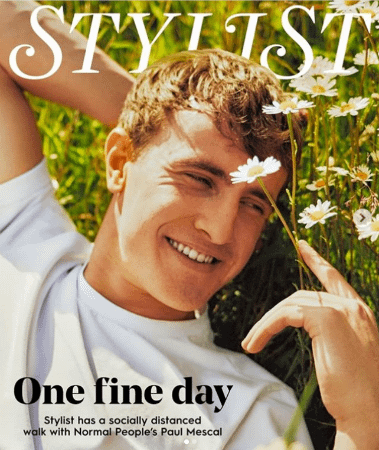 -I really hope the buzz surrounding Normal People (which drops in Canada this week on CBC Gem) is still loud enough when productions resume so that Paul Mescal and Daisy Edgar-Jones translate their critically acclaimed performances into huge new roles. They’re both so, so good in it and deserve to be big stars. Mescal’s on the new cover of Stylist, where he talks about auctioning off his character’s infamous chain to support a mental health and suicide charity called Pieta House.

–Lana Del Rey can’t stop digging a hole. This weekend, she posted yet another defense of her original post, and compared herself to yet another POC. “The difference is, when I get on the pole, people call me a whore, but when [FKA] Twigs gets on the pole, it’s art.” At what point does someone in her life just change her Insta password?

-Speaking of singers who’ve screwed up, after videos surfaced of her laughing at racist comments in a video chatroom, Doja Cat wrote an Instagram post on Sunday addressing the allegations.

–Ben Affleck and Ana De Armas have graduated to taking his kids on their pap walks.

-Somehow, last week I missed Jezebel’s chat with the owner of the Ana de Armas fan account that she blocked. It’s great!

–Khloe Kardashian has a new face and I don’t usually like to judge this shit but this is actually shocking. She’s a completely different person than how she looked just a few years ago.

-This clip Henry Winkler telling Jimmy Fallon about the jackets that changed his life is very sweet.

-Speaking of Fallon, Jennifer Lopez is (not surprisingly) much better at learning TikTok dances than he is.

–Sam Neill recruited Helena Boham Carter for a short in which she plays his cellphone and it’s good clean quarantine fun.

–Grimes and Elon Musk have updated their baby’s name after being told it can’t contain a numeric digit.

-There’s only one episode left of this season of Killing Eve but I can’t imagine I’ll ever want to catch up if critics keep calling it confusing and unwatchable.

-Speaking of unwatchable shows with a connection to Phoebe Waller-Bridge, I liked it at the beginning of the season but the Run finale was really, really bad. It’s actually kind of shocking how far this show went off-course.

–Christopher Nolan‘s Tenet runtime is reportedly 3 hour 15 min. Meh, at this point what else are we doing?

-I was very charmed by The Lovebirds, starring Issa Rae and Kumail Nanjiani, now out on Netflix.

Han Is Back In Fast and Furious 9