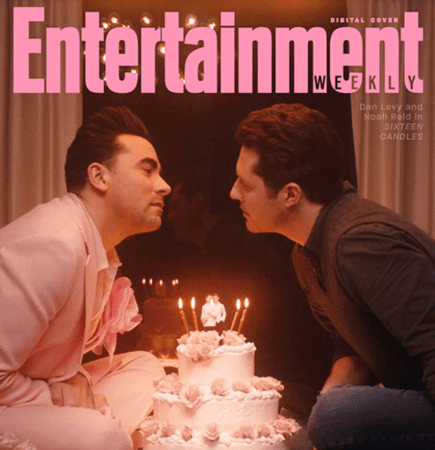 -I’m not ready for Schitt’s Creek to be over (like, literally — I still have half a season to catch up on), but EW’s cover story with Dan Levy and Noah Reid is beautiful.

–Rihanna and Drake were interacting in the comments of DJ Spades’ Instagram Live and when he got too complimentary of her, she wrote “Give Drake some water.” Absolute perfection.

–Ariana Grande and her new bf are sheltering-in-place together.  TMZ calls him “a high end real estate agent who handles multi-million dollar listings for L.A.’s A-list buyers” so hopefully he’s found them a good place to hunker down.

-Outlander star Sam Heughan is getting dragged for posting photos from his Hawaii vacation in the middle of a pandemic. Seriously celebrities, just put down your phones. You’re all sucking at this.

–Prince Charles has tested positive for covid-19 but is only displaying mild symptoms.

-In other royals news, The Sun continues to stoop low by stirring up rumours about Prince Harry and ex-girlfriend Chelsy Davy.

-Good hometown boy Shawn Mendes is donating $175,000 to Sick Kids in Toronto to assist in purchasing equipment and supplies for coronavirus preparedness.

–Kylie Jenner is also stepping up in a big way, donating $1 million to buy PPE.

–Ryan Reynolds is donating 30% of his Aviation gin profits to out of work bartenders.

-Meanwhile, Kourtney Kardashian’s 10-year-old son said on Instagram that Kylie Jenner and Travis Scott are not back together — and then his account promptly got shut down because 10-year-olds are not supposed to be on Insta.

–Chrissy Tiegan needed lettuce so she met up with some strangers in a church parking lot and traded cake, wine and banana bread for three heads of romaine. It was incredibly cute.

-Here’s a bit of brightness in our current sea of suck: Bindy Irwin got married.

-I had never heard of Netflix’s new documentary Tiger King a couple of days ago, and now it’s EVERYWHERE. People are obsessed. I have to watch this thing, don’t I?

-While talking to Variety, novelist and showrunner Michael Chabon went off on a tangent about what he originally wanted Picard to be like, and as someone who has given up on that show, oh how I wish he’d have stuck with it: “I always said if we could have just done a whole show about Picard and the dog on the vineyard in France, with no starships, no phasers, the only Romulans would be those two Romulans who work for him on the vineyard, and no politics — just, like, there’s a funfair down in the village and they all go, and maybe Picard solves a very low stakes mystery in the village, like, someone has stolen the antique bell out of the bell tower, or something like that?”

–Chris Evans plays a man trying to shield his son from a murder rap in the trailer for Apple TV+’s upcoming show Defending Jacob.