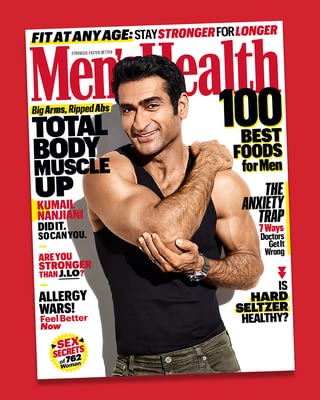 -Now that Kumail Nanjiani has a superhero body, he’s putting it to good use in the pages of Men’s Health.  In the new issue’s photo spread, he recreates scenes from Top Gun, Wolverine, Die Hard and American Psycho.

–Britney Spears reportedly “doesn’t want to work” out of resentment for her father and the rules of her conservatorship. I don’t blame her; if she creates new music, he’ll profit from it and she’ll still be stuck getting a monthly allowance.

–Kate Beckinsale shared a terrible story about how Harvey Weinstein reacted days after she showed up to the Serendipity premiere (which took place shortly after 9/11), in a white suit. “He started screaming ‘you stupid fucking C*NT, you C*NT you ruined my premiere.’ I had no idea what he was talking about and started to shake. He said, ‘If I am throwing a red carpet you get in a tight dress, you shake your ass you shake your tits you do not go down it looking like a fucking lesbian you stupid fucking c*nt.’ I tried to say ‘Harvey, the city is on fire, people are still looking for their relatives none of us even felt the premiere was appropriate much less coming out dressed like it’s a bachelor party.’’ He said, ‘I don’t care – it’s my f–king premiere and if I want p*ssy on the red carpet that’s what I get.'”

-I’m not necessarily saying this was racist, but man Florence Pugh should have worded this differently.

–Justin Timberlake and SZA were on Ellen’s show and SZA was asked about her Rolling Stone cover and JT kept talking over her. Because of course he did.

-Now there’s photos of Ben Affleck and Ana de Arma kissing on a beach in Cuba so I guess we have to accept that this is happening. Aren’t we already going through enough, universe?!?

–Omid Scobie at Harper’s Bazaar offered a behind-the-scenes look at what went down on Prince Harry and Meghan Markle‘s last day in London, and it’s pretty heartbreaking.

-I haven’t caught up on the new season of Schitt’s Creek yet but I was spoiled on the latest relationship development, and this behind-the-scenes footage of them shooting that scene broke me.

–Tom Hanks‘ sons Colin and Chet both shared updates on how their parents are doing following their Coronavirus diagnosis. Meanwhile, the staff at his hospital gave Hanks a Wilson volleyball to keep him company.

-Speaking of virus fallout, the Juno Awards, the Canadian Screen Awards and the Tribeca Film Festival have been postponed, production on Riverdale has shut down in Vancouver after a crew member came into contact with a patient, A Quiet Place 2 — which was scheduled to hit theatres next weekend — is delayed until further notice, Disney is postponing Mulan, and the release of Fast & Furious 9 was pushed back an entire year.

-Meanwhile, it feels wildly irresponsible of Kristen Bell to share this post. Maybe she was just trying to stop the panic but it implies older and/or immune-compromised people don’t matter. This thing is bad (maybe worse than we thought) and healthy people need to do their part to protect those who are vulnerable so our hospitals don’t get overloaded like in Italy. (I really liked this article: “Young and Unafraid? Good For You. Now Stop Killing People“)

-Bless Ronan Farrow for breaking through today’s deluge of bad news to share this video of Sandra Oh and Dan Levy introducing themselves to Joni Mitchell at the VF Oscars party.

–Niall Horan very excited for his week-long Late Late Show residency — and he wants James Corden to know it.

-The trailer for Disney’s Soul, starring the voices of Jamie Foxx, Tina Fey and John Ratzenberger, is here.

Priyanka Chopra on the “Professional Hazard” of Social Media

Nicki Minaj Calls the Cardi B Fight “So Mortifying and Humiliating”