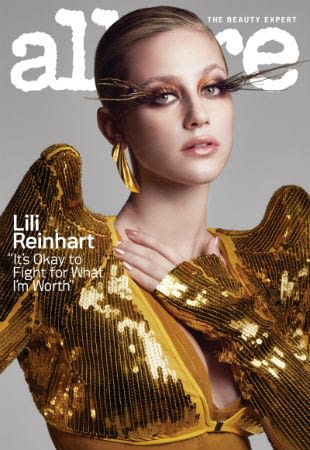 -I love everything about the styling of Riverdale star Lili Reinhart‘s Allure cover spread.

–Macaulay Culkin‘s Esquire cover story is great. He talks about wanting to start a family with girlfriend Brenda Strong (“We’re figuring it out, making the timing work'”), he once again comments on his relationship with Michael Jackson (“He never did anything to me. I never saw him do anything. And especially at this flash point in time, I’d have no reason to hold anything back. The guy has passed on. If anything…right now is a good time to speak up. And if I had something to speak up about, I would totally do it”), and he calls out James Franco for asking him about it when he saw him on a plane (“I give him a little nod as we’re putting our bags overhead. Hey, how you doing? Good, how ya doing? And it was right after the Leaving Neverland documentary came out, and he goes, ‘So, that documentary!’ And that was all he said. I was like, ‘Uh-huh.’ Silence. So then he goes, ‘So what do you think?’ And I turned to him and I go, ‘Do you wanna talk about your dead friend?’ And he sheepishly went, ‘No, I don’t.’ So I said, ‘Cool, man, it was nice to see you'”).

–Brad Pitt‘s didn’t just win an Oscar. This award season has rehabilitated his image — and now he even has a gushing People cover story to prove it.

–Sophie Turner is pregnant and expecting her first child with Joe Jonas. I don’t know why I thought she was way older than 23.

–Jessica Chastain and James McAvoy‘s friendship is goals. They recently shot a movie in Toronto and were spotted hanging out together all over Yorkville during their downtime.

–Dwyane Wade and Gabrielle Union introduced the world to their 12-year-old transgender child Zaya with a sweet message.  Wade‘s oldest child, who just celebrated his 18th birthday, also shared photos from earlier in their childhood with a lovely message of support.

–Lana Condor told a story on James Corden‘s show about how she thought she was stealthily following David Beckham around a Whole Foods until he called her out on it.

-Speaking of Lana, in honour of PS: I Still Love You dropping on Netflix today, Netflix has made To All The Boys I’ve Loved Before available for anyone — even if you don’t have a Netflix account.

–Jameela Jamil‘s bad month continues. Now she’s refuting claims that she has Munchausen Syndrome after a Tweet went viral with screengrabs of all the interviews she’s given in which she discusses a wide array of ailments.

-Since she wore her Oscar cape, Natalie Portman‘s history with female directors has been called in question, but it seems like she’s championed women directors and attempted to work with them more than a lot of other actors have.

–Lauren Graham is playing the Gordon Bombay role in The Mighty Ducks reboot for Disney+ and I dig it.

–Rick Moranis is returning from a 24-year acting hiatus to star in a Honey, I Shrunk the Kids reboot.

Blake Lively Really Wants You To See Her $2M Rings