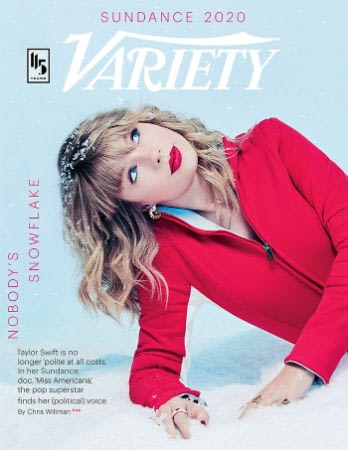 –Taylor Swift is about to drop her new Netflix documentary (after it premieres this week at Sundance), and she’s promoting it with a Variety cover story. She talks about why she stayed silent so long on her political views (“Every time I didn’t speak up about politics as a young person, I was applauded for it. It was wild. I said, ‘I’m a 22-year-old girl — people don’t want to hear what I have to say about politics.’ And people would just be like, ‘Yeahhhhh!'”), revisited her VMAs moment with Kanye West (“As a teenager who had only been in country music, attending my very first pop awards show, somebody stood up and sent me the message: ‘You are not respected here. You shouldn’t be here on this stage.’ That message was received, and it burrowed into my psyche more than anyone knew”), and revealed sad news about her mom (“While she was going through treatment, they found a brain tumor. And the symptoms of what a person goes through when they have a brain tumor is nothing like what we’ve ever been through with her cancer before. So it’s just been a really hard time for us as a family”).

–Prince Harry and Meghan Markle have issued a stern warning to photographers in Canada after paparazzi photos of Markle taking a walk with Archie in a public park in Vancouver were published.

-Meanwhile, Harryreturned to Canada (on a Westjet commercial flight!).

-I’ve only listened to the podcast from Smallville’s Michael Rosenbaum a couple of times because whew, that guy is A LOT, but I tuned into this week’s Stephen Amell episode and it was pretty devastating. Amell taped it less than a month after wrapping Arrow and in the midst of his Code 8 promo tour, and about 30 minutes in he had a full-on panic attack. He returned a couple of weeks later to finish out the recording and talk about the toll that shooting 15-hour days for eight seasons straight with projects during hiatuses has taken on him.

–Pamela Anderson just got married to a movie mogul. Good for her?

-This is a great interview with Aidy Bryant, who’s promoting the new season of Shrill. She talks about always being asked about her weight (“I feel like I’m a lot more things before that, like friend, wife, daughter, whatever. And I’m fat. I’m also a star! A certified star. I’m also rich now, so eat shit”) and how she had to fight for her character to have sex scenes (“How can you have a story about a person’s body and about their relationship to their selves and not involve sex? I just always felt like so many fat characters were so sexless, or the sex was hypercartoony, where it was like she jumps on a man and she’s going to break his dick off and suck him until he’s dead or whatever. But I always was having cool sex and had boyfriends”).

-Former Life with Derek stars Michael Seater and Ashley Leggat know all about Twitter rooting for their step-sibling characters to get together — and they’re cool with it.

–Oprah just picked a problematic novelfor her book club and people are not happy.

–Alison Brie plays a woman losing her grip on reality in the trailer for Horse Girl, which is premiering a Sundance.