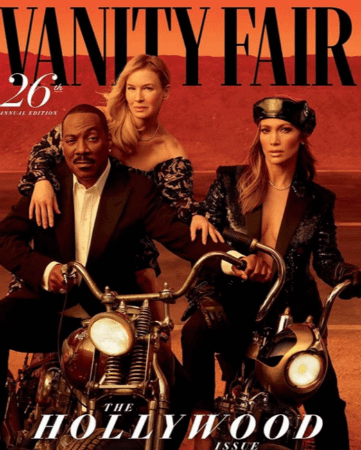 -Vanity Fair’s annual Hollywood issue features Eddie Murphy, Jennifer Lopez, and Renee Zellweger. That’s how shocking the Murphy and Lopez Oscar snubs are — everyone assumed they’d be nominated so much that they ended up on covers like this.

-I also like this point about the Oscar noms: if Greta Gerwig — a film snob married to a film snob and backed by Spielberg — can’t get in with the Academy what chance does a POC have?

-Academy voter Stephen King caused a stir when he tweeted “I would never consider diversity in matters of art. Only quality.” His later (frustratingly unthreaded) tweets provided more context (“You can’t win awards if you’re shut out of the game”) but I still think he’s missing the point. No one is advocating for inclusion trumping good story, but you won’t get good story if it’s always the same people telling the same story over and over again. It’s not just about being shut out of the game. It’s that the game is rigged so there’s no way in.

–Vanessa Hudgens and Austin Butler have reportedly called it quits after nearly 9 years(!) of dating.

-Why is Vince Vaughn talking to Trump so shocking? He’s never really hidden his political preferences.

-Netflix has renewed You. I like where it ended last season, but I am also of the very strong belief that the next season should be the last (unless they want to do a Joe-behind-bars season).

-The Mail on Sunday is trying to defend its reasoning behind publishing Meghan Markle‘s private letters. Hard pass.

–Vin Diesel plays a reanimated corpse in his latest movie. So, pretty much the same as usual then?