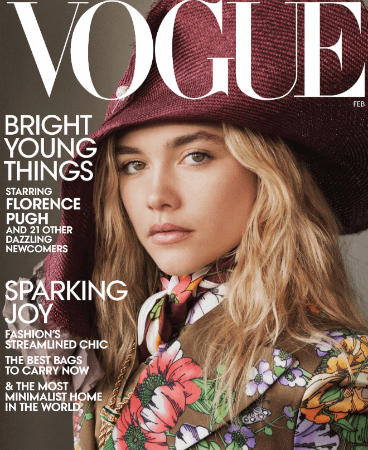 -I feel like I have Florence Pugh face blindness. I’ve seen her in Midsommar, Fighting with My Family and Little Women, but I still don’t know that I could pick her out of a lineup. Regardless, her Vogue spread is very good.

-Now that the dust is starting to settle, the Evening Standard has a timeline of how Prince Harry and Meghan Markle‘s announcement reportedly went down. Harry originally contacted Prince Charles about spending more time in Canada and America just before Christmas, but was told he needed to come up with a thought-out plan. He was then told the Queen would meet with him, but “would not discuss his wishlist before he had discussed it in detail with his father.” But then that meeting was blocked by courtiers. Prince Charles and Prince William were only sent a copy of Harry and Meghan’s statement “10 minutes” before it was released.

-According to Lainey, there’s an implication that Harry and Meghan rushed the announcement it to get ahead of The Sun’s story — which was broken by a reporter who happens to be good friends with Will and Kate’s press secretary. 👀

–The Mirror claims Will is “incandescent with rage,” while the Daily Mail claims Harry has been locked in four-way conference call with the Queen, Charles, and Will as they try to find “workable future role within days.”

-I kind of love that the couple’s new website was made by a Toronto agency (which might explain how they were able to keep it under wraps from the family).

-This is surprising to me: according to People, when Harry and Meghan returned to London this week, Archie remained in Canada. “It is believed that Archie stayed with Meghan’s close pal, Jessica Mulroney.”

-It was a very good day for news to come out that the Queen’s granddaughter Zara Tindall was banned from driving for speeding.

-Yesterday was the perfect day for celebrities to slide some news under the radar, so I’m surprised there wasn’t a wave of divorce announcements. The only one I saw was from Arrow’s Katie Cassidy, who split from her husband after just 13 months of marriage. (Weirdly because I follow all of them on IG, it seems like all three actresses who’ve played Canary are going through major splits with their SOs right now.)

-At Wednesday night’s National Board of Review gala, Bradley Cooper presented Brad Pitt with the Best Supporting Actor award and in his acceptance speech, Pitt credited Cooper for helping him get sober. “I got sober because of this guy, and every day’s been happier ever since.” Pitt also brought the jokes, quipping, “It’s nice to be able to leave this thing carrying something other than George Clooney.”

–Pitt also did a video interview for W, in which he reminisces on his prom and first kiss (“Her name was Lisa. It was in her garage. It was in fourth grade. She was one street over. I ran home afterwards. It was just too much.”)

-Kids teaching their famous parents how to use TikTok is my fave new thing. Me next, please.

-It’s really something to see Kristen Stewart this relaxed and actually having fun while doing movie promo. She’s grown so much.

-I adore Jane Austen and will consume everything related to her, but Sanditon, which starts Sunday on PBS, is a tough hang for me — just because the ending is so very non-Austen-y. The reviews are glowing, though.

–Reese Witherspoon and Jennifer Aniston‘s table ran out of beverages at the Globes, so Reese asked Beyonce for some champagne. That is some Madeline energy right there.

–Tiffany Haddish said she first took a meeting with Like a Boss costar Rose Byrne at a hotel bar when she noticed two gay men. “I start hitting on them and once I get a little drink in me, I want to, you know, donate my womb. I was like ‘If y’all want to have a baby, let me know. I’ll pay child support. Y’all can raise it. I’ll carry it and I’ll breastfeed it for six months and it’s all yours.’ Rose was like, ‘No, Tiffany. You can’t do this. You need to go to your room.’ That’s when I knew we’d be friends forever. She protected my womb.”

–Mae Whitman posted a Parenthood reunion pic and I felt it with my whole heart.

-The Chilling Adventures of Sabrina released a music video to promote the new season and it’s … something.

-The Television Critics Association panels are happening this week, and FX CEO John Landgraf did his annual #PeakTV report, revealing scripted originals grew 7 percent in 2019 and set a record — topping 500 show in a year for the first time.

-FX also announced that Atlanta will get an expanded order — but won’t air until 2021.

-They also revealed trailers for two of the year’s most anticipated new shows: Devs, from Alex Garland, writer/director of Ex Machina and Annihilation, which stars Nick Offerman and Sonoya Mizuno, and follows a computer developer investigating a quantum computing company that she believes is responsible for the disappearance of her boyfriend; and Mrs. America, starring Cate Blanchett, Sarah Paulson, Tracey Ullman, Rose Byrne, Uzo Aduba, Margo Martindale, Elizabeth Banks and John Slattery.

–Bong Joon Ho‘s Parasite is heading to HBO as a limited series. I adored that movie and this seems like a very bad idea.

-I’ve been sort of following the drama in Romancelandia because it’s all over my TL, but this is big. Romance Writers of America president has resigned (finally!) after publishers Harlequin, Berkley, Kensington, Avon, and St. Martins all pulled out of the RWA national conference. (This is a good recap of what initially went down, although the RWA has continued to handle it all horribly since then.)

-I’ve been feeling superhero fatigue (both from movies and TV) for a while now, but goddamn the new Birds of Prey trailer is good. Goddamn.