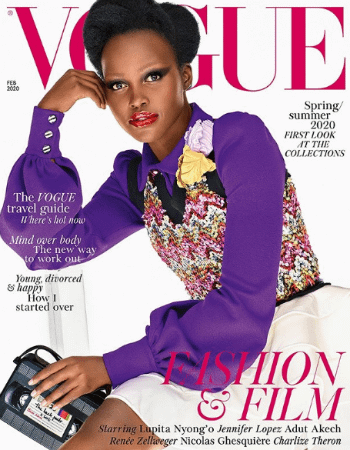 –Lupita Nyong’o’s first ever British Vogue cover is stunning. She talks about her decision to stay mum on her personal life (“Privacy is a commodity that is hard to come by”), what she looks for in a script (“I don’t get fulfillment from the number of zeros attached to a project. What I’m seduced by is the potential to shift a narrative. That is very seductive to me, having social and cultural impact”) and hanging out with costars (“Filming is so time-consuming. And intense. With Black Panther, a lot of us were single. On Little Monsters, nobody was single. Everyone, when they’re done with their day’s work, wants to go home to their families, which makes a whole lot of sense. When you don’t have that it’s very isolating”).

–Prince Harry, Meghan Markle and their 7-month-old reportedly flew to Toronto over the holidays to see friends, including Meghan’s BFF Jessica Mulroney. They later met up with Meghan’s mom in Victoria.

–Shawn Mendes and Camilla Cabello also spent time in Toronto over the holidays (though she wasn’t spotted with him on NYE).

-Congrats to Michelle Williams, who is reportedly pregnant and engaged to Hamilton director Thomas Kail. They met on set while working on the FX show Fosse/Verdon, which Kail directed.

-Crazy Ex-Girlfriend creator/star Rachel Bloom, who is 7 months pregnant, got stranded on the side of the road with her husband in Bakersfield and tweeted that they were going to sleep in their car, so a couple invited them into their home.

-Tragic news: prolific television producer Jenji Kohan (creator of Orange Is The New Black and Weeds) is mourning the sudden death of her 20-year-old son, who died following a ski accident in Utah.

–Beyoncé posted a black screen on Instagram 10 minutes before midnight on NYE, and the internet lost its poo, thinking it was another surprise album drop. The comments under the post were hilarious (my fave was “Bey MAAM, I’m poor, go to sleep”). But she quickly followed it up with a video retrospective of her highlights of the decade.

-This is weird: eleven of the last 14 seasons of Survivor — including each of the last five — have been won by men.

–Sharon Stone was blocked from the Bumble dating app — for impersonating Sharon Stone.

–Busy Philips did an IG post about the shitty way she found out her E! show was being cancelled, and it included screenshots of the hilariously profane letter her daughter wrote to the network.

–Florence Pugh, 23, does not seem to love it when people remind her that her BF Zach Braff is 44.

–Jodie Turner Smith said the nude photo she posted on IG was “not a thirst trap” since her hubby, Joshua Jackson, took the pic. Works for me.

-Bombshell is bombing at the box office. I saw it yesterday and I walked out with the same question as this person: “who exactly was that for?!”

-The performances were good though, especially Margot Robbie. Things are already looking up for her in 2020 — she’s confirmed that Jared Leto will not appear as Joker in Birds of Prey.

-In other Joker-related news, no one is doing more to make me feel better about not seeing Joker than its director, Todd Phillips. In a new interview, he claims the success of the Joaquin Phoenix-led film had nothing to do with the character’s connection to Batman.

-Also, the fact that Phillips packed the movie with homages to his hero Martin Scorsese — only to have Scorsese admit he hasn’t seen it — is amazing. (“I saw clips of it. I know it. So it’s like, why do I need to. I get it. It’s fine.”) The other amazing part of that Scorsese interview is when he basically says that he talked all that shit about Marvel movies in the press so that he could get a meeting with Disney’s Bob Iger about film preservation.

–Kim Kardashian did NOT give her daughter the shirt John F. Kennedy was shot in as a Christmas present. Just in case you were worried about that.

-This is probably the review of Star Wars: The Rise of Skywalker that best captures how I felt about it.

-Meanwhile, a wild Reddit conspiracy theory about why the new Star Wars is so bad has made #ReleaseTheJJCut a trending topic. Look, big studios are always going to have notes and demand changes, for better or worse. That’s how blockbusters are made. That doesn’t mean Disney was trying to purposefully torpedo J.J. Abrams‘ reputation so his future WB/DC projects would tank. That’s ridiculous. (And also, Chris Terrio was hired to co-write Rise of Skywalker on the heels of two terrible Justice League movies and Batman V Superman, so the actual movie this conspiracy theory is about disproves the idea that one bad film could actually tank a white man’s Hollywood career).

-Not to mention the fact that of the five Disney-era Star Wars movies since 2015, only The Last Jedi didn’t have a production crisis.

-Speaking of Star Wars, now that he’s no longer under contract John Boyega has gone a little wild on social media. I don’t particularly love jokes about “laying the pipe” with Rey or when actors make fun of shippers, but it’s kind of fun to see him completely unleash.

-As of yesterday, Friends is no longer be available to stream in the U.S. on Netflix. I wonder if and how that’s going to affect this year’s subscription numbers.

-I binged the entire second season of You this holiday break. I’m happy with that decision.