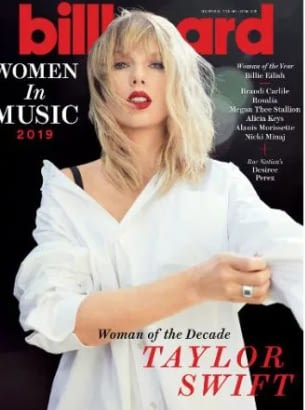 -In her new Billboard cover story, Taylor Swift discusses advocating for women’s rights and breaking down gender barriers in the industry. “I get so many phone calls from new artists out of the blue — like, ‘Hey, I’m getting my first wave of bad press, I’m freaking out, can I talk to you?’ And the answer is always yes! I’m talking about more than 20 people who have randomly reached out to me. I take it as a compliment because it means that they see what has happened over the course of my career, over and over again.”

-There was a Melrose Place cast reunion and they all still look great!

-Survivor finally ejected Dan Spilo from the game — and it took him harassing a crew member before they did it. He was caught on camera inappropriately touching female players, he make it to the loved ones visit and to the top eight, but producers only removed him after his problematic behavior affected their own team. The show was already wearing it after his first accuser was voted out — the bad press is going to be even worse now.

-Shortly after the news broke that Harvey Weinstein had reached a settlement, Emily Ratajkowski showed up at the premiere of Uncut Gems with the words “Fuck Harvey” scrawled across her arm. She also posted it on IG. In words I have never said before (and likely never will again), go Emily Ratajkowski!

-After multiple interviews defending it, now Olivia Wilde says the depiction of the real-life journalist she plays in Richard Jewel was “out of her control.”

–Harry Styles opted to eat cod sperm rather than tell ex-girlfriend Kendall Jenner which of his songs are about her.

–Keri Russell was on Jimmy Kimmel’s show last night, and did some adorably terrible Star Wars impersonations. She also showed up Jon Hamm in the pickup line game.

–Keanu Reeves‘ John Wick 4 and The Matrix 4 are getting the same release date. This seems…dumb.

–Hugh Grant has been in a Twitter feud with Piers Morgan and he’s absolutely owning it.

–Victoria Beckham answered fan questions on Instagram and she was kind of adorable about it?

-Despite critics seeming to dislike its new season, The Marvelous Mrs Maisel has already been renewed for season four.

-The In the Heights trailer from Lin Manuel-Miranda and Jon M. Chu is giving me all the feels!