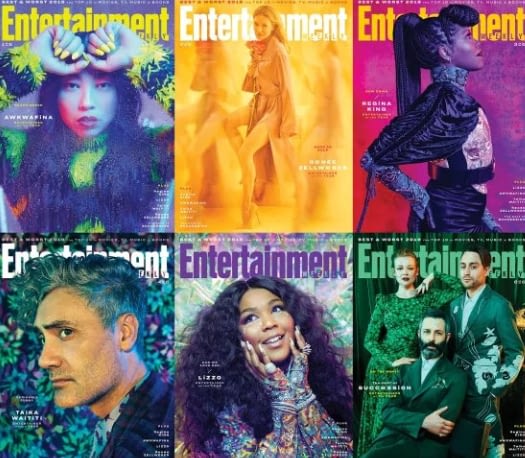 –EW’s Entertainers of the Year include Lizzo, Awkwafina, Renée Zellweger, Regina King, Taika Waititi and the cast of Succession.  I love how everyone is lusting over the Jeremy Strong pic. I don’t see it as Kendall but his real life photo shoots bring a whole other energy. Also, Sarah Snook talks in her adorable real accent in the video and she so wonderfully perky and un-Shiv-like.

-Time also named Lizzo the entertainer of the year. My Spotify Wrapped rankings would agree.

-Well, it now makes more sense why Justin Timberlake broke his silence on the affair rumours long after the story had died down. According to Us Weekly, “Jessica encouraged Justin to put out his statement on Instagram because she felt embarrassed by his actions and wanted him to take accountability.” People is quoting a source who says Jessica will stand by her man: “Obviously Justin drank too much this time, but Jessica believes he didn’t cheat on her. What’s most important to her in life is her family and being the best mom to Silas. She’ll never break up her family over something like this.”

-In the Hollywood Reporter, Reese Witherspoon addresses the backlash over her sizeable paycheque for Apple’s The Morning Show. “I guarantee these companies are real smart, and if they agree to pay us, they’re doing it for a reason. They probably had a lot of lawyers and a lot of business people decide on that number because they knew that they were going to make more than that back. Does it bother people when Kobe Bryant or LeBron James make their contract?”

-The SAG nominations were announced today. It’s insane that Knives Out isn’t nominated for ensemble cast, but good on the cast of Parasite for making the cut (I finally saw that movie and holy s%$# it’s amazing).

–Harvey Weinstein and his former studio have a tentative $25 million deal with his accusers. Weinstein, accused of offenses ranging from sexual harassment to rape, won’t have to apologize, admit wrongdoing or pay his own money.

-How did I miss all the GIFs of Aaron Taylor-Johnson’s penis this week? (NSFW, obvs)

-As we recover from the first half of the CW crossover (which just isn’t as fun as they usually are, right?) here’s the first trailer for the CW’s newest superhero show Stargirl, starring Luke Wilson.

-Look, I don’t even go here but why is the Star Wars cast shading Rian Johnson and The Last Jedi? He did what he had to do.