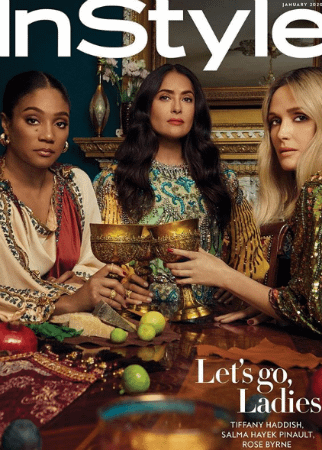 –Tiffany Haddish, Salma Hayek and Rose Byrne cover InStyle to promote their new movie Like A Boss (the new trailer made me lol).

–Celine Dion is in Toronto tonight (I’m kicking myself for not getting tickets) but this photo is priceless — much like the ring she’s wearing.

–Cara Delevingne tweeted that she was no longer dating Ashley Benson, but then deleted the tweet. So are they still together? And if they’re not, who gets the sex swing??!

-Quibi remains a mystery to me, but good for the Amell cousins.

–Julia Louis-Dreyfus reflected on her SNL days during a sit-down with Stephen Colbert: “I didn’t understand how the dynamics of the place worked. It was very, very sexist. People were doing crazy drugs. I was oblivious; I just thought, ‘oh wow, he’s got a lot of energy.'”

-This site is doing a Pride & Prejudice rewatch and it’s such a daily happy-maker!

–Jack Black forgot that he was in The Holiday. I wish I could too.

-On last night’s Jimmy Kimmel Show, he had a wax statue made of himself and then he left it around the office, startling his staff members — especially his cousin. The end killed me.

–Nick Cannon spent most of yesterday annoying Eminem on Twitter before he dropped another diss track. But why tho?

-Former star T.J. Miller weighed in on the Silicon Valley finale — first as himself and then in character. God, he’s not even on the show anymore and he’s still exhausting.

-This is Us’ Justin Hartley’s divorce continues to get messy.

-Aw man, the lead singer of Roxette passed away.

-The Ghostbusters trailer has arrived. I dunno — do we really need a dark and somber GB?