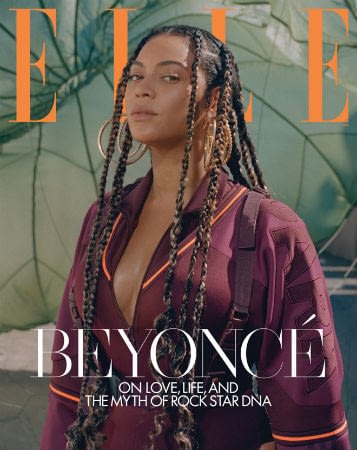 –Beyonce did an interview! Kinda! She answered questions in Elle that were sent in via email and social media. And she almost certainly answered them via email. Ok, so not really an interview at all then but still! Beyonce speaks! The topics range from everything from shopping at Target to giving to charities to surviving miscarriages.

-People are really upset that Lizzo showed off her butt at the Lakers game with a thong dress. I mean, it got her name trending just as she was dropping a new video so good on her?

–Chrissy Teigen did an impromptu Twitter Q&A session and she was remarkably candid about celeb life, opening up about hired help, free clothing, secret social accounts, paparazzi and more.

–Daisy Ridley is getting a lot of (justified) flack for her obliviousness and confusion when an interviewer asked her about her privilege.

-The Golden Globes are always dumb but this morning’s nominations were especially dumb. No women were nominated for best director or screenplay. On the TV side, they somehow loved The Morning Show and Catch-22 but shut out Watchmen, Veep, Barry, When They See Us and Schitt’s Creek. A huge surprise was Cats getting shut out of the major categories even though the HFPA screened it — and it seemed like the perfect film for the Golden Globes.

-I watched A Marriage Story and while I refuse to get sucked into the ‘whose side was it on?’ conversation, I can wholeheartedly say that my favourite bit was this Merritt Wever scene: part 1, part 2.

–Miley Cyrus, who’s in the middle of getting a divorce from Liam Hemsworth, got a new tattoo that says “Freedom.”

-God bless Pajiba for reminding us all of the time Adrien Brody bought a castle for Elsa Pataky, then they did a 35-page spread exclusive for Hello! about it, then she dumped him for Chris Hemsworth.

-The Atlanta Journal-Constitution is asking the filmmakers behind Richard Jewell to release a statement acknowledging it took dramatic license when it portrayed their journalist Kathy Scruggs as trading sex for scoops. I’m actually surprised that Olivia Wilde, who plays the late Scruggs, has been defending the movie’s use of this tired, terrible trope, seeing as she’s the daughter of two journalists.

-Say what you will about Ryan Reynolds (and ohh boy, I have) but he sure knows how to capitalize on a social media trend. His gin company hired the Peloton commercial wife for their latest ad.

-Meanwhile, Ryan is stuck in a video game in the first trailer for Free Guy.

-The Wonder Woman 1984 trailer has arrived and it’s glorious.