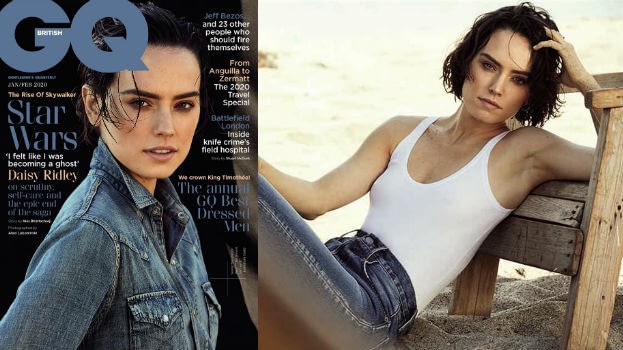 -I don’t know why British GQ styled Daisy Ridley like a mechanic, but I’m kind of here for it? I also dig her comments about royalty: “I’m going to tell you something so shocking for Americans but not Brits; I don’t massively care about the royal family. I am not a royalist. Buckingham Palace is great but it’s an unused building, isn’t it? The other day, there was a story that the Queen uses six rooms in the palace. Six. How is that a good thing? It’s prime real estate.”

-I was really worried when I saw that Princess Anne was trending this morning, but it turns out it’s just because she’s a badass. She was part of the conversation with Trudeau in which he and other world leaders mocked Trump, and then was scolded by the Queen when she refused to meet with him. I think I love her.

–Tom Hanks, Shia LaBeouf, Robert De Niro, Adam Driver, Jamie Foxx and Adam Sandler take part in THR’s drama actors roundtable, and it’s a pretty decent discussion (though De Niro barely talks). I like Hanks’ view on comedy: “Can you be funny if you grew up with a built-in swimming pool in your backyard? I don’t think you can. If you grew up being able to swim any time you wanted to, you experienced none of the shortcomings of life that you turn into self-deprecation. You can’t do it.”

–Kesha is throwing her name into the mix of stars who have entered the cosmetics world with the launch of her makeup line, Kesha Rose Beauty.

–Camila Morrone has no problem with her 23-year age gap with boyfriend Leonardo DiCaprio. “There’s so many relationships in Hollywood⁠—and in the history of the world⁠—where people have large age gaps. I just think anyone should be able to date who they want to date.”

–Jennifer Lopez is hosting SNL this weekend, and I wish they’d given her a better promo.

-Bad news: that Michael Jackson musical appears to be going forward, and it will be “a part-puppet show in which the late singer’s alleged history of child sex abuse is blamed on a glove-shaped alien forcing Jackson to feed on boys.” Good news: despite earlier reports, rep for Johnny Depp says that he and his company are not producing or involved in any way.

-This is terrible: Mena Massoud says he couldn’t get an audition after starring in Aladdin, which made $1B.

-If I currently looked like Kate Beckinsale does at 46, I’d be unapologetic about posing in a bikini too.

–Daniel Craig is back as Bond in the No Time to Die trailer. I’m loving that Léa Seydoux is in this. I’ve only seen her in weird French movies and I love her.