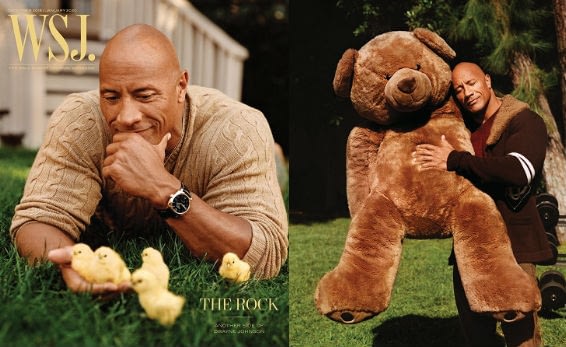 -In a new interview with WSJ Mag, Dwayne “The Rock” Johnson talks about his recent marriage to his longtime girlfriend, singer-songwriter Lauren Hashian. “My divorce did a number on me. I wasn’t fearful of getting married again, there was just some hesitancy. But Lauren was incredibly patient: ‘I love you, you love me, we have this amazing life together — no presh.'”

–Liam Hemsworth is reportedly dating 22-year-old actress Maddison Brown, but she shut down questions about it in a recent interview. “I’m not answering that question. My rule is not talking about my personal life.”

–Kim Kardashian was once offered $1 million for an Instagram post by a fast-fashion brand that often knocks off Kanye West‘s clothing line, so he asked her not to do it. She says he then rewarded her on Mother’s Day with a $1M cheque and a contract to make her part owner of his line. So basically, when Kim Kardashian stays off social media, everyone wins!

–Tekashi 6ix9ine‘s girlfriend claims that Offset slid into her DMs. Cardi B insists he was hacked. The world, somehow, continues to spin.

-The Virginia Roberts Giuffre interview aired last night in the UK and she repeated her claim that she was trafficked by Jeffrey Epstein and forced into sex with Prince Andrew three times when she was 17.

-When Chris Evans‘ glorious sweater was revealed in Knives Out, my friend and I both automatically reached for each other and sighed loudly. So yeah, this costume designer deserves all the love she’s getting.

–Chrishell Hartley filed a divorce petition in response to This Is Us actor Justin Hartley‘s divorce filing, and she listed a date of separation that’s months after what he listed.

For some reason, the Variety reporter asked everyone on the Gotham Awards red carpet what they thought of Baby Yoda. Jennifer Lopez clearly had no idea what he was talking about (but pretended she did), Lili Reinhart wants to cuddle him, Laura Dern rolled with it, Awkwafina joked that she looks like “an uglier version” of him, and Elisabeth Moss said that Baby Yoda has “united the country in a way that is very necessary.”

-A sexual violence hotline in the U.S. witnessed a spike of more than 40 per cent after Grey’s Anatomy aired an episode about sexual assault. I gave up on Grey’s eons ago but caught up on that episode because there was so much buzz about it at the time and it was incredibly powerful.

-Of all the things Jason Momoa could possibly call Chris Pratt out about, a plastic water bottle wasn’t at the top of my list.

-Speaking of books, the author of Red, White and Royal Blue (which was one of my fave books of 2019) just announced a new novel and she’s describing it as “a queer Kate and Leopold” so I’m gonna need that asap.

–Paul Welsley has an idea of how he wanted The Vampire Diaries to end, and it’s way better than how it actually ended.

-I wasn’t expecting the Black Widow trailer to give me Bourne vibes but I dig it. Also Florence Pugh going from Little Women to this is a giant flex.

Amanda Seyfried Strips Down for W