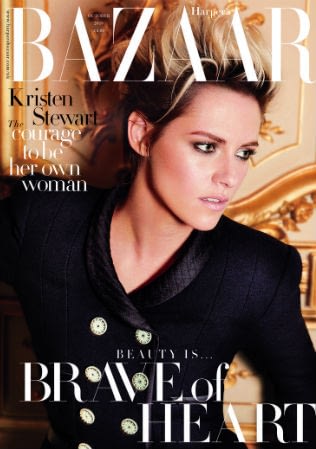 -In her new Harper’s Bazaar cover story, Kristen Stewart talks about being true to herself (“I’ve fully been told, ‘If you just like do yourself a favor, and don’t go out holding your girlfriend’s hand in public, you might get a Marvel movie.’ I don’t want to work with people like that”) and moving past her Twilight phase (“I try to avoid the word ‘awkward’. I want to reclaim that word, because it’s been used too violently against me”).

-FFS. She’s starring in the two buzziest movies this fall (Noah Baumbach’s Marriage Story and Taika Waititi’s Jojo Rabbit), so I don’t know why Scarlett Johansson isn’t trying harder to steer clear of controversy. Like, she literally has to just avoid saying something stupid and she’ll coast to an Oscar nom. And yet here she is in her new THR cover story defending — with very little prompting, I might add — Woody Allen. “I love Woody. I believe him, and I would work with him anytime…I see Woody whenever I can, and I have had a lot of conversations with him about it. I have been very direct with him, and he’s very direct with me. He maintains his innocence, and I believe him.”

-Will we ever really know what happened with Brangelina and the kids on that plane? Probably not, but Brad Pitt is coming clean about having issues with alcohol. In a new interview with the New York Times, he talks about getting sober (“I had taken things as far as I could take it, so I removed my drinking privileges”) and going to AA for a year and a half (“You had all these men sitting around being open and honest in a way I have never heard. It was this safe space where there was little judgment and therefore little judgment of yourself. It was actually really freeing just to expose the ugly sides of yourself. There’s great value in that”).

–Dwayne Johnson had to leave his honeymoon early to fill in for an injured Kevin Hart on the debut of Kelly Clarkson’s talk show. (I’m really bummed for her that Hart was her first booked guest. She deserves better.)

–Lil Nas X held his own and did really, really well despite Kevin Hart‘s attempts to gaslit him about his choice to come out. The internet was def on Lil Nas X’s side.

-Almost one year after Mac Miller‘s death, a man has been charged in connection with his passing for selling counterfeit pharmaceutical drugs containing fentanyl to Miller, two days before his death.

-Yikes. The Crazy Rich Asians co-writer has left the sequel amid a pay disparity dispute. Sources say that Warner Bros. offered Adele Lim $110,000-plus — while offering co-writer Peter Chiarelli $800,000 to $1 million (he later volunteered to split his fee with her). “Pete has been nothing but incredibly gracious, but what I make shouldn’t be dependent on the generosity of the white-guy writer,” Lim said. “If I couldn’t get pay equity after CRA, I can’t imagine what it would be like for anyone else, given that the standard for how much you’re worth is having established quotes from previous movies, which women of color would never have been [hired for]. There’s no realistic way to achieve true equity that way.” So basically the WB sold the first film on its groundbreaking representation — but is willing to endanger the sequel by underpaying because of sexism.

-It’s time for the People’s Choice Awards nominations — the only awards show where Riverdale could possibly lead the way.

-Here’s a guide to when all the Fall TV shows are premiering.

-This is a great, great interview with Jeremy Strong, who might be doing better work on Succession than anyone else on TV at the moment.

–Olivia Wilde talked to THR about her film Booksmart’s box office battle, defending the (weird? wrong?) decision to immediately open wide instead of starting with a limited run and building off word-of-mouth a la Ladybird.

-Uh, Dakota Fanning may not have been my first choice to play an Ethiopian Muslim refugee in a movie.

-Here’s our very first glimpse of Birds of Prey, 2020 in a teaser that’s playing before the new IT movie.

-I didn’t know I needed another installment of the Bad Boys movies until I saw the new Bad Boys for Life trailer and yeah, gimmie!