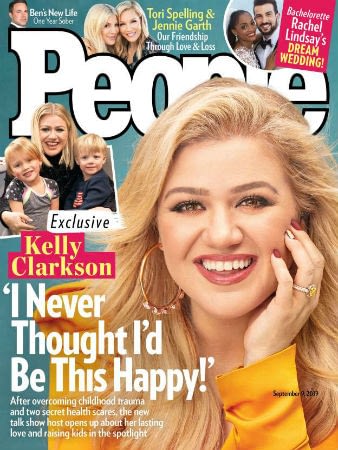 -Ahead of her syndicated talk show (premiering Sept. 9), Kelly Clarkson covers People and talks about prioritizing her family (“When we were doing the schedule for the show, I was like, ‘I have to drop my kids off at school.’ And I’m always the one who puts them to bed”), impressing her kids (“Our 3-year-old doesn’t get it but the 5-year-old, she’s very clever. She’s already asked that I have Chris Martin on to sing ‘Yellow.’ It’s her favorite song”) and recounts bursting a cyst on her ovary while filming live finales of The Voice — just one week after suffering through a burst appendix while hosting the Billboard Music Awards (“Blake [Shelton] was talking to me and all of the sudden, everything he said just went away and I had to grab his arm and I was like, ‘Something is wrong.’ That was more painful than the appendicitis. It was literally a week after my surgery so I was freaking out!”).

-Holy shit, I want Hugh Grant to ghostwrite all of my insults from now on. This is savage!

-This is a pretty terrible report about how a lot of Rihanna fans have unknowingly signed up for a $50/month VIP membership for her Savage x Fenty lingerie line — and they can only cancel over the phone.

-This interview with Joel Schumacher is so very, very juicy that the bit about a post-Pretty Woman Julia Roberts crying in his arms in the backseat of a car and saying “I never needed to be this famous” isn’t even the best anecdote! When asked about shooting Batman Forever he said: “Tommy Lee Jones is, and I say this with great respect, a scene stealer. Well, you can’t steal the scene from Jim Carrey. It’s impossible. And, I think it irked Tommy. He wasn’t kind to Jim. He did not act towards Jim the way an Oscar winner with a star on Hollywood Boulevard, being the oldest member of the cast, and having such a distinguished career and the accolades to go with it, should have acted towards Jim.” He also called Val Kilmer “psychotic.” “I do know Marlon Brando threw Val’s cellphone in the bushes [on the set of The Island of Dr. Moreau] and said, ‘Young man, don’t confuse your ego with the size of your salary, ever.’ Here’s the difference between Val Kilmer and Tommy Lee Jones. I don’t care what state Tommy is in emotionally, when that camera rolls, there is no bad take. Val is a different story.”

-I am very here for Lauren Graham‘s return to TV.

–Netflix just nabbed a show about female journalists and politics from super producer Greg Berlanti and The Vampire Diaries creator Julie Plec, inspired by NYT writer Amy Chozick’s best-selling memoir about being on the campaign trail with Hilary Clinton.

-The third season of 13 Reasons Why is getting trashed by critics.

-This is a very good look at fandom-led campaigns, specifically the one created to save The OA.

–This video of Sophie Turner meeting Queer Eye’s Jonathan (who used to host Gay of Thrones) is a delight.

–Victoria Beckham posted a photo of David dressed up like Elton John and it’s really what I needed to get me through this never-ending week.

-I HATE elevators but if I had gotten stuck for hours with Jason Momoa, I might get over it.

-This is tragic: Jessi Combs of Mythbusters died in a “horrific accident” in Oregon while attempting to break her own land-speed record. She was 36 years old.

-Just before its debut at Venice and Toronto, the final Joker trailer has arrived.