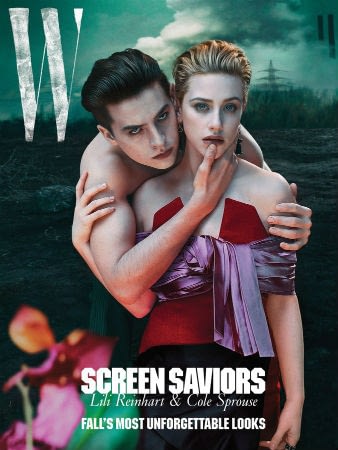 -Well, this is awkward — or is it? W’s just dropped their latest cover story, in which Riverdale costars Cole Sprouse and Lili Reinhart open up about love, the show, and what their future holds — just days after reports about the pair splitting up. They refused to be interviewed together when they talked to the mag in May (maybe seeing the writing on the wall?) but today they both promoted the cover on IG with posts that have their fans wondering if they really did split after all. Reinhart wrote “BREAKING: A reliable source has confirmed that none of you know shit” while at the very same moment Sprouse posted “UNPRECEDENTED: Cole Sprouse and Lili Reinhart consume the flesh of ‘reliable sources’ to fuel their bacchanalian sex cult.”

-The speculation continues that Diddy is dating Steve Harvey’s 22-year-old daughter. Not only is she half his age, she used to date his son! That’s gonna make for some awkward family BBQs…

-There’s more rumblings that Constance Wu is acting not so great, this time on the Hustlers press tour. (Although I don’t really get what the big deal is about her publicists allegedly asking publications to mention her first when talking about the film’s cast; she’s the topped billed actor in the credits so that’s not unheard of.)

–Jennifer Lopez celebrated her 50th birthday with a banger of a party. I love that her birthday dress was designed by Donatella Versace — the same person who designed the Grammy dress that launched JLo into the stratosphere. (Did you know that dress was the reason Google Images was created? True story.)

-Orange Is The New Black’s Taryn Manning insists she’s not suicidal after posting a troubling rant on Instagram. I’ve loved her since Weirdsville and want only good things for her.

–Nicole Kidman claims she’s embarrassed that hubby Keith Urban has a lyric about her that goes “She’s a maniac in the bed, but a brainiac in the head.” Surrrrrrre she is.

-Queer Eye’s Tan France has a web series called Dressing Funny, and the season finale featured Pete Davidson. (Which was good, but not as good as the episode that featured Tina Fey and Rachel Dratch.)

-This year marks a new low for female directors at the Venice Film Festival. Out of the 21 films in competition, only 2 are directed by women. (Meanwhile here at home, TIFF announced its gala lineup earlier this week and 50% of titles are directed or co-directed by women — a record number for the fest.)

-Hollywood is closely watching Once Upon a Time in Hollywood’s opening box office this weekend, considering it a test for audience’s appetite for original, adult-skewing Hollywood tentpoles amid franchises and sequels. Meh. I want more adult-driven films but I have zero desire to see this one — mostly because of reviews like this.

-This featurette for Where’d You Go, Bernadette really makes me want to see this movie — despite all the behind-the-scenes drama and delays.

-The Zombieland 2 trailer is here and it’s making me so happy! (I love that it’s called Zombieland: Double Tap.)