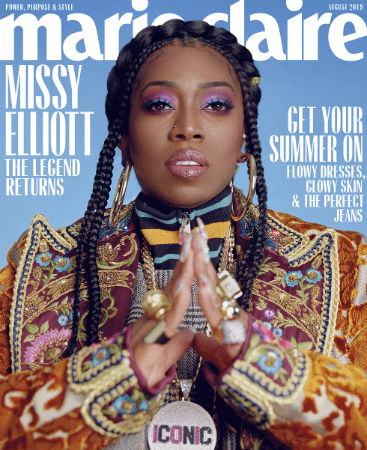 -I adore Missy Elliott‘s Marie Claire cover. She talks about breaking down barriers (“I am a champion for my brown, dark women. I want them to be seen. Because we are beautiful. If we knew how special we were, we would be unstoppable”), gender equality (“We need more women out there, singing and just for being. Just for balance. Just a great balance”) and learning to appreciate the big moments (“I was just going, going, going. It wasn’t resonating what was happening. I was in the car with Michelle Obama [for Carpool Karaoke], and [my friends] called me like, ‘Girl, we got to celebrate that’s huge!’ And I’m like, ‘I’m watching a movie on Netflix'”).

-Whoo! Taika Waititi has inked a deal to write and direct a follow-up to his 2017 smash, Thor: Ragnarok.

–Macy Gray gave a very strange talk show interview in which she said she’s a “vampire.”

-Netflix has altered Hannah’s graphic suicide scene in 13 Reasons Why after controversy — more than two years after it originally aired.

-This is the happiest I’ve been about Emmy nominations in YEARS. Sure, there were some snubs in this morning’s announcement that bugged me (Better Things, The Good Fight, Crazy Ex-Girlfriend, Hot Priest), but wow some great newcomers managed to break into the ranks, including Russian Doll, Schitt’s Creek, Jodie Comer and Fleabag. Nicole and I watched the season finale of Fleabag last night (again) and were blown away by Oliva Colman and Sian Clifford‘s performances, so I’m thrilled they both landed Supporting Actress nods.

–Sacha Baron Cohen‘s tweets about getting an Emmy nod are amazing.

-The bromance continues for Matt Damon and Chris Hemsworth.

-I have very little interest in watching Once Upon A Time in Hollywood. I am, however, here for watching Brad Pitt and Margot Robbie rib Leonardo DiCaprio about the Titanic door controversy. “Could you have squeezed in there? You could’ve, couldn’t you?” Leo was so over it before the interviewer even got the full question out.

-One thing I love about the CW is how often it lets its actors (especially women) direct episodes.

-Also, I stopped watching Supergirl but I love that they changed her costume to ditch the skirt.

-It sounds like Hayden Panettiere is having a rough go of it. She remains apart from her 4-year-old child, who lives with her father in Ukraine, as her current boyfriend faces charges of abuse.

–Awkwafina is having a moment. She’s interviewed by Margaret Cho in the new issue of Harper’s Bazaar. She talks about attending red carpets for Crazy Rich Asians: “I grew up never really feeling pretty or like a girly girl. I was uncomfortable in my skin when it came to that stuff. I had been dressed up for events and had gotten glam before, but at the Crazy Rich Asians premiere I looked in the mirror and it felt different. It sounds clichéd, but I felt like a princess.”

-Also, Awkwafina stars with Emma Roberts in the new trailer for the fantasy film Paradise Hills.

-A bearded Chris Evans helps smuggle Ethiopian refugees to Israel in the trailer for Netflix’s The Red Sea Diving Resort.