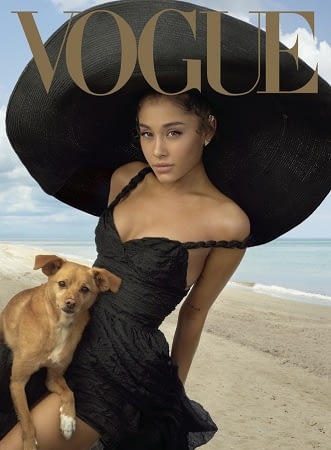 -In her new Vogue cover story, Ariana Grande reflects on her short-lived relationship with Pete Davidson. “My friends were like, ‘Come [to New York]! We’re gonna have a fun summer.’ And then I met Pete, and it was an amazing distraction. It was frivolous and fun and insane and highly unrealistic, and I loved him, and I didn’t know him.” She also released a new video.

-In her Cosmopolitan cover story, Mariah Carey talks about getting married to music executive Tommy Mottola when she was 23 and he was 44. “You might want to picture a child bride. There was a conscious effort to keep me as this all-American, whatever that means, girl. It was very controlled. There was no ­freedom for me as a human being. It was almost like being a prisoner.”

-The September edition of Vogue is a very big deal — and Meghan Markle is set to guest edit the British version.

–Katherine McPhee and David Foster‘s wedding got a Vogue spread. Huh. I would have bet on People magazine.

–Aziz Ansari’s Netflix special starts and ends with reflections on getting caught up in the #MeToo movement — but in between he seems to pretend it never happened.

–Evan Rachel Wood thinks Chief Hopper on Stranger Things is a problematic TV love interest. I mean, sure he was really grumpy this last season, but out of all the morally questionable dudes on TV right now, this seems like a strange target.

-I love this clip of Winona Ryder refusing to listen to David Harbour make fun of his size.

–Kristen Bell says she will keep making Veronica Mars as long as they let her. And we’ll keep watching it!

-It took a while, but Nicki Minaj eventually decided to cancel her concert in Saudi Arabia following backlash.

–Bryan Cranston and Aaron Paul debuted their tequila collab and everyone’s like “cool but what about Breaking Bad tho?”

-Netflix just took another big (but expected) hit: Friends is officially leaving Netflix and moving to WarnerMedia’s streaming service — the terribly named HBO Max. As the TV critic for the New York Times tweeted: “The fact that the biggest story in TV over the next year will be a competition among the decades-old sitcom reruns on streaming TV services really sums up something about pop culture right now.”

-I’m pretty over the Disney remakes, but good on them for not making the new Mulan movie a shot-for-shot remake, and for dropping the original’s problematic characters and songs.

Shailene Woodley Talks Kate Winslet & Not Identifying as a Feminist