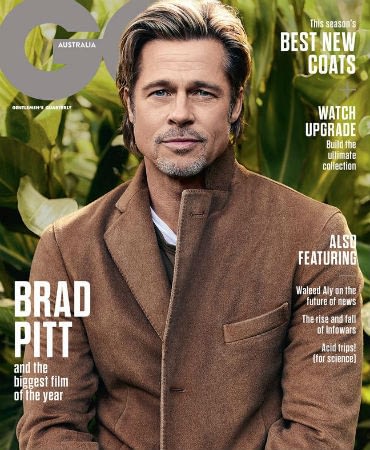 –Brad Pitt is on the cover of Australian GQ and this the best he’s looked in years. He talks about shooting Once Upon a Time in Hollywood with Burt Reynolds (“We had two days of rehearsal with him and just to sit and talk and he was just… you know, they say don’t meet your heroes but he was just so gracious and kind. And still just funny as fuck”) and why he produces more than acts these days (“I keep doing less and less. I really believe that overall it’s a younger man’s game – not that there aren’t substantial parts for older characters – I just feel, the game itself, it’ll move on naturally”).

-Expect the Once Upon a Time in Hollywood hype machine to kick into high gear in the next few weeks, especially considering it’s tracking for a $30 million opening weekend — which is modest considering it stars Pitt and Leonardo DiCaprio. I guess people aren’t as interested in sitting through a 2-1/2 hour movie about white dudes in the “good ol’ days” as they used to be.

–Jake Gyllenhaal might actually be losing it on this press junket.

–Sophie Turner and Joe Jonas released a wedding photo, which gives us a closer look at her Louis Vuitton dress. It’s not what I was expecting (I thought she’d go younger and edgier) but it’s very lovely.

–Katherine might not be liking that Sophie and Joe stole her Paris wedding spotlight; she tweeted to the paparazzi which yacht they are honeymooning on.

–Idris Elba set the record straight after two writers claimed they were pushed out of his play.

–Emma Portner, a choreographer and Ellen Page’s wife, blasted Justin Bieber on social media, accusing him of being terrible to work with. “I couldn’t afford to eat. I was sweeping studio floors to be able to practice my own craft. The way you degrade women is an abomination.”

–Julia Roberts and her fam are vacationing in Ontario cottage country.

-I’m not sure when Shailene Woodley turned into a fashionista but I’m here for it.

-Despite Meghan Markle and Prince Harry‘s wishes to have Archie’s godparents private, the Church of England is making all details of the baptism public for anyone who is willing to pay the fee.

-Of course Ryan Reynolds turned his Bottleneck Challenge video into an ad for his gin. Of course he did.

–Helen Mirren, Ian McKellen, and Russell Tovey star in the trailer for The Good Lie.