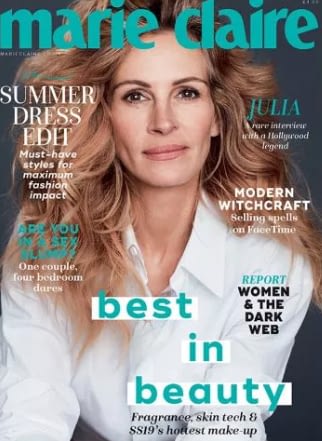 -In her new Marie Claire cover story, Julia Roberts talks about how Hollywood has changed during her lifetime: “When I started, there wasn’t any social networks, the internet barely existed, people couldn’t take photos with their mobile phones. There were logical stages of career progression. You did a film, if it worked you’d have a chance to work again. If your second film was a success, you could get a better pay cheque and another new role. Now someone can come out of nowhere and achieve incredible things, which I imagine is very destabilising. Building a career was a lot more methodical 30 years ago.”

–Janelle Monáe brought Lupita Nyong’o onstage to dance during her show and it made my day.

-Spider-Man: Far From Home is being promoted as a crucial epilogue to Avengers: Endgame — and it seems to be working. It’s tracking for a $150M holiday weekend at the box office.

–Rihanna got emotional when reuniting with her old PE teacher and it was v. sweet.

-I recently binged a lot of episodes of Drunk History, which is always a good idea. The new Tessa Thompson episode in which she plays Eartha Kitt needs to get in my eyeballs stat!

-This recap of every insanely good look Céline Dion has worn at couture week thus far is perfect content.

-The world does not need a live-action Little Mermaid movie, but if it must exist I’m glad that Ariel will be played by a beautiful black actress who was discovered by Beyonce.

–Keanu Reeves took a break from being the internet’s boyfriend to start shooting the new Bill & Ted movie.  We’ll allow it.

-Yikes! Channing Tatum has been granted a restraining order after a woman allegedly broke in and was found living in his Hollywood home.

–A$AP Rocky was arrested last night following an altercation on a street in Sweden.

-This is lovely: Pharrell Williams surprised 114 Harlem students by guaranteeing them “A-list internships” at the end of their freshman year of college.

-I’m bummed that Fred Savage‘s after-show spoof What Just Happened is mostly just a bitter takedown of fan culture. The premise was promising.

-The first trailer for Jumanji: The Next Level has arrived. I watched the last one on a plane and was surprised at how much I laughed.